Posted on November 8, 2016 by cesardagord

Are you ready for this?

Exactly two years ago, at EICMA 2014, Honda delivered a concept motorcycle, the much rumored and anticipated Africa Twin.  To many it was the answer for what they always wanted.  To others, myself included, it missed the mark. 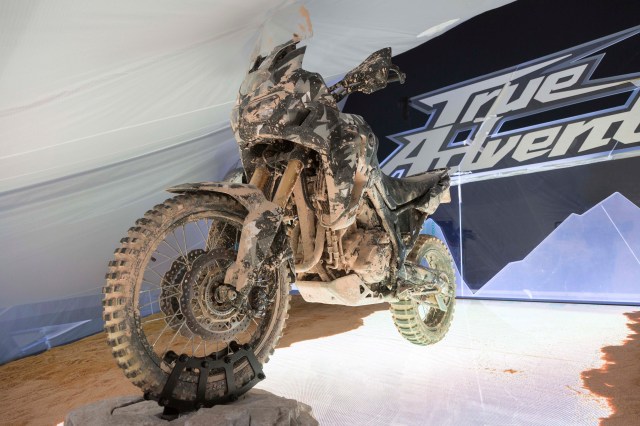 Honda delivered a great motorcycle, and perhaps it was the first motorcycle to make a dent on the BMW and KTM hegemony at the top of the charts of adventure motorcycles.  But aside from DCT (dual clutch automatic transmission which is not a consensus as a needed equipment to begin with) and a dual air cleaner system in the place usually taken by the fuel tank (which helps with a lower center of gravity when most of the tank volume sits lower), it had nothing really new to offer.  It is lighter than the large, 1200cc series of bikes, but it is heavier than the already heavy middle weight, 800cc series. 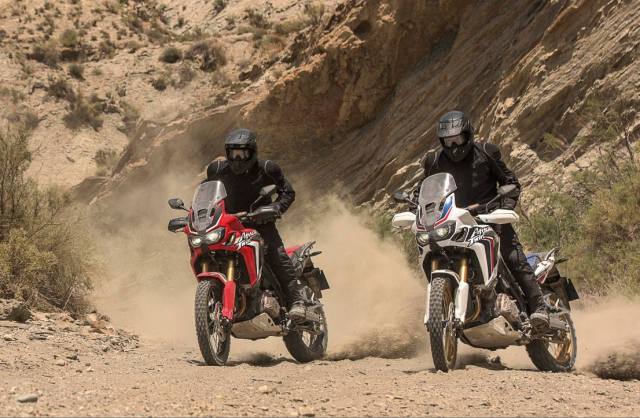 Honda Africa Twin – may have a true adventure competitor soon!

As an adventure rider, I appreciated what Honda brought to the equation. It is a compromise that many many riders appreciate, the bike certainly filled the gap left by the KTM 9X0 series and then some. It is a success story! However, the so called dual cylinder, lighter weight, rally looking and hopefully rally performing adventure motorcycle gap was not closed with the Africa Twin.

The ellusive gap… are we finally there?

Since the Africa Twin did not answer my questions, and no other manufacturer answered these questions (or dreams?) up to now, I went my own way and “built” my own lighter weight, dual cylinder adventure motorcycle using a Rally Raid kit on a Honda CB500X, a  city bike (CB).  The existence of the Rally Raid kit on itself is a sign there is an unresolved gap on the motorcycle industry. 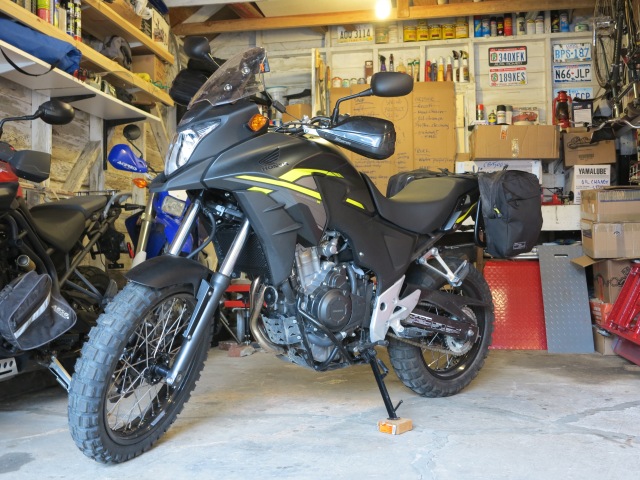 It turns out the CB500X Adventure is a fun machine. Power, a low 48hp, is not an issue at all.  But power delivery is the issue that prevents this motorcycle to become an ideal bike for technical riding, when clutch slippage (wide and strong friction zone) is needed.  Add to it the 19 inch front wheel and limited front suspension and this bike is not there.  I enjoy it, but it remains a temporary solution.

Two years later, and Yamaha pulls the same trick at EICMA, releasing a prototype machine. Just that it looks much more like what we have been wanting, dreaming about,  and expecting, you are on the same boat I am: a dual cylinder motorcycle that is a serious off-roader, not only an adventure machine, but one that is also a rally machine. Something that has some power, but does not compromise its fun factor with extra weight or reliability issues. Is this the sweet spot?

After the Africa Twin failed to fill that spot, which is my opinion on the matter, mind you, since I know many of you like the Africa Twin, I turned my attention to other motorcycles that could fit the sweet spot.  Besides the Yamaha T7, two other motorcycles in several states of development called my attention.  One of them was launched this year at EICMA and was somewhat of a surprise, is the Ducati Scrambler Desert Sled.

It is not a rally machine but it is a lot closer to the real thing when compared to the outgoing Urban Enduro.  It has more suspension travel which is adjustable (fully adjustable on the rear), more ground clearance, a 19-in front wheel (as opposed to the 18-in wheel) and the simplicity of the design.  With no fairings, it looks like the real thing!  It is not what I’m looking for, but bet it is a fun machine. 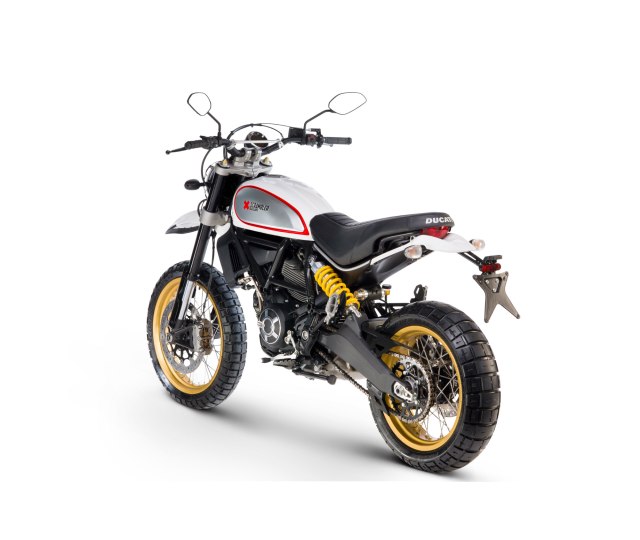 Another motorcycle that will rock this market will be the long speculated KTM 790 adventure, which in KTM fashion would likely be a rally ready machine.  KTM machines are ready to race, right?  That bike has not materialized itself yet, but a street version, the KTM Duke 790, with the anticipated parallel twin motor, has shown up in concept form at EICMA 2016.  If the motor exists, then the KTM 790 in adventure form is likely in the works. 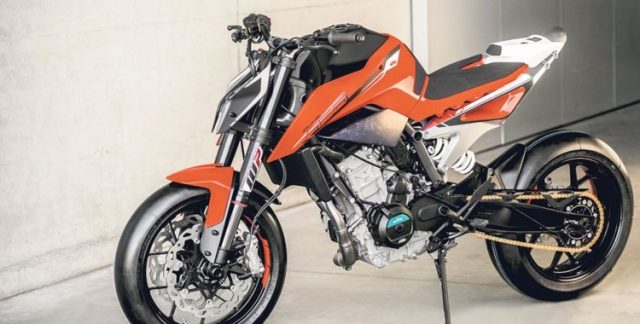 Meanwhile we have a true concept, in my opinion the star of the 2016 edition of the EICMA, the Yamaha T7.  This is the third bike on my short list of ideal adventure machines, and top of my list pf desired machines, the dreamed and rumored Yamaha XTZ 700.  The Yamaha T7 concept is a potential appropriate size Ténéré, the real inheritor of what the XT600Z (and 750) meant to enduro machines, it seems. On looks alone this concept seems to be exactly what we have been asking for.  And Yamaha’s own words seem to confirm it.  This is what Yamaha tells us about the T7:

Many of the current middleweight Adventure models are perceived as too oriented to the street and too sophisticated. They are therefore not suitable for use in real off-road conditions. The Adventure universe needs new specimens that can offer the versatility to tackle long distances and great endurance, typical of the original Ténéré, combined with a contemporary design and top technologies.

I agree with Yamaha.  Or they may have been reading my posts and, of course, I’m only one of the many who have been asking for this motorcycle in motorcycle forums and motorcycle reviews.

Is the T7 the holly grail?

The T7 is obviously only a concept, looking very rally, enduro like, a bike ready for serious off road riding. It was developed by the Yamaha teams in Europe which include, according to my Italian friends, engineers from Yamaha’s rally team in France, research and development by the Yamaha team in Italy, and design by the Dutch team.

The concept bike seems to have a steel frame designed specifically to cradle the 700cc parallel twin motor, lots of carbon pieces, a flat dirtbike seat, and an Akrapovic exhaust.

Add to it a very rally-like fairing, almost vertical wind-screen, and tall cockpit and the bike looks like the real thing.

These are items that will likely be toned down on a consumer version.  The spy or leaked photos we shared here on a previous post did not display some of the innovative design carbon pieces we see on the EICMA 2016 concept, for example. Who knows what direction Yamaha will take from this concept. 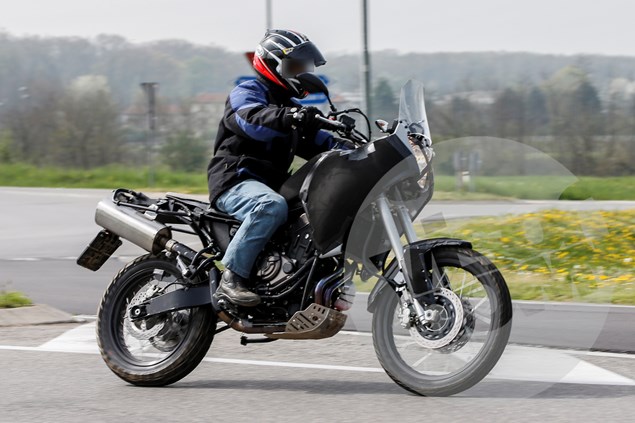 Is this Yamaha’s mid-size adventure Ténéré?

What we know is that the motor is the CP2 (cross-plane two cylinder), at a minimum it is an adventure-dedicated version of the compact and light weight parallel twin, 270 degree crankshaft, 700cc, 74hp motor available on several models on the Yamaha line up (MT-07 / FZ-07 and XSR700).

Another item we can see are the 21-inch front wheel and 18-inch rear wheel.  All in all the motor, the frame, and the wheel sizes offer the backbone, the combination of parts, materials and shapes that makes this bike look like a serious off-road machine.  Even if the actual product is toned down, you know what can be done.

The weight of such a beast should be anywhere between 450 and 475 lbs if we use the MT-07 Tracer as a base, which is rated at 433 lbs wet.  The added weight would come from a larger tank, larger spoke wheels, stronger frame and sub-frame, longer suspension, bash plate, taller fairing and windscreen, etc.

It should still be lighter than the current 800cc offerings from Triumph and BMW, and certainly looks to be a lot more dirt-oriented than those two bikes.  The motor is an already known factor, and there is plenty of praise out there for it.

We will know more about this bike in 2017. The bike should be ready by the fall of 2017, when the show season starts and it is likely that Yamaha will use that time to officially introduce it to the public in its final form. Yamaha indicated it should be available for sale to the public in 2018.

In conclusion… I’m cautiously optimistic that this bike will be the yard stick against which  mid-size adventure motorcycles with real off-road ambitions will be measured. KTM is likely to offer a competitor which will have more power, will likely be lighter, but might be more expensive and perhaps at a different level of sophistication.  It seems we are finally getting attention to this segment of the market, actually, Yamaha may be creating a new segment to this market. 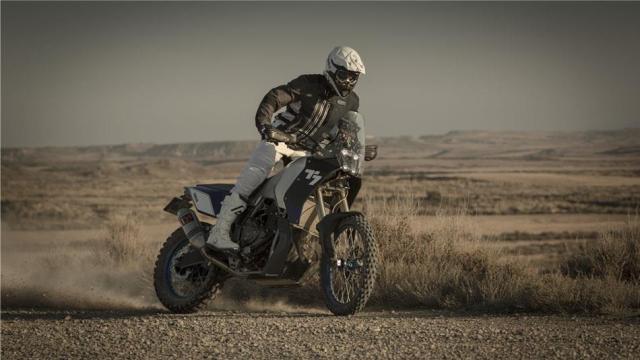 Personally, it seems I will be finding a solution for a motorcycle in this segment, one that is very likely a potential replacement for my CB500X Adventure.  If I can enjoy riding the 48 hp motor on my CB500X when off pavement, having a 74hp motor, delivering a broader torque curve, better sounds and more traction from its 270 degrees crankshaft, the Yamaha might just be perfect for what I want.

More from Yamaha’s press release on this bike:

This lightweight machine is based on an all new chassis that has been designed to complement a specially developed version of Yamaha’s highly acclaimed 700cc CP2 engine, delivering strong torque and an easy power delivery for perfect traction in all conditions.

Equipped with an aluminum fuel tank, 4-projector LED headlight, a carbon fairing and skid plate, and a custom made Akrapovič exhaust – as well as high specification KYB front suspension – the T7 is a vision of the ideal adventure machine, and is playing a major role in the development of Yamaha’s next generation adventure models.

A new chapter from the book of legends will be on the street – and on the dirt – from 2018.

It indicates this bike is a concept, or “a vision of the ideal adventure machine” so we will have to wait to see what the final product will be. It certainly is a great step in the right direction.

Disclaimer:  I’m not a professional rider, and obviously not a professional writer. I write this blog as a hobby and because of my passion for motorcycles and motorcycle riding. I’m not affiliated with any business or organization related to the content of my posts, I’m not paid to write and publish my posts. The potential income generated by advertisements you may come across on my posts are going to WordPress, the organization hosting my posts. I pay WordPress to manage and host my posts, I would have to pay more to have advert-free posts.

9 Responses to Yamaha T7: An ideal adventure/rally machine one step closer to reality!