The Dog on the Roof

Motorcycling is a hobby to me. The bikes stay in the garage until the weekend or the holiday or the vacation arrives. Several acquaintances of mine do not know this blog exists. The Result: if I don’t tell I ride motorcycles, people who may see me on a regular basis at work or other activities, but who do not know me well, do not know that I ride or how important riding is for me. And I know of several others who are this same way.  Point in case, a few months back when I was at the Ducati shop looking at the Streetfighter 848 I ran into one of my soccer friends, people I only see at the pitch, once a week or so. We were both surprised to see each other there, looking at the same bike. He was negotiating his ST2 for something else. Eventually he bought a KTM Super Duke. And as you know, I bought the Streetfighter 848.

We talked while there and we decided to go for a ride “one of these days”. Eventually we connected in one of our soccer matches and the “one of these days” became July 15th.  We started without much of a plan, and in the end we rode one of the variations of my Pacific Loop, but in the clockwise direction. Although the winds seem more favorable going north on the coast, I like better the south route, as it is easier to stop and enjoy the views if I decide so.  Besides stopping for gas, and for deciding which way to go, we only really stopped when we got hungry and decided to have a lunch break in Yachats. This was my first time in this restaurant, the Ona Restaurant.

Outside seating area, The Ona Restaurant, Yachats, OR. July 15th, 2012

From the outside seating area you have this view. Not the best, but the ocean is there. 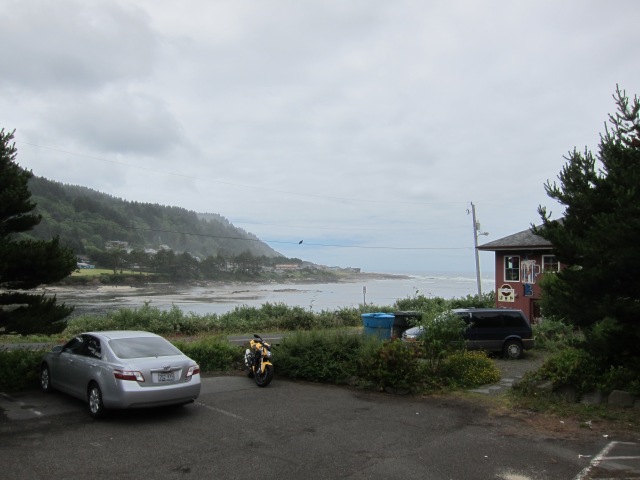 I’ve been once to the restaurant on the red building (on the right on the photo above) before. It is cozy but it is a much smaller operation and at lunch time staff may get overwhelmed if too many customers show up. It is actually more like a bar. The Ona Restaurant is a better structured restaurant and offers a more varied menu. The food was excellent and I will definitely go back there. As we were seating outside, we heard people talking about a dog on the roof, and looking up and pointing to the roof. I had to see what that was all about – yes, there was a dog on the roof. 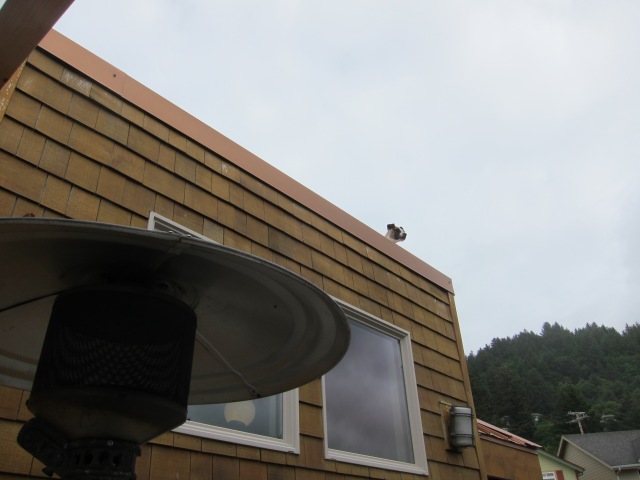 And a very intent dog at that!

I do the great majority of my rides by myself. But it is good to be with someone else every now and then.  I have my riding friends, people who I already know for a while and with whom I’m comfortable riding together. When riding with someone new, that’s when you learn about their riding style. Everyone rides their own ride. So to be riding together may involve some issues and compromises. 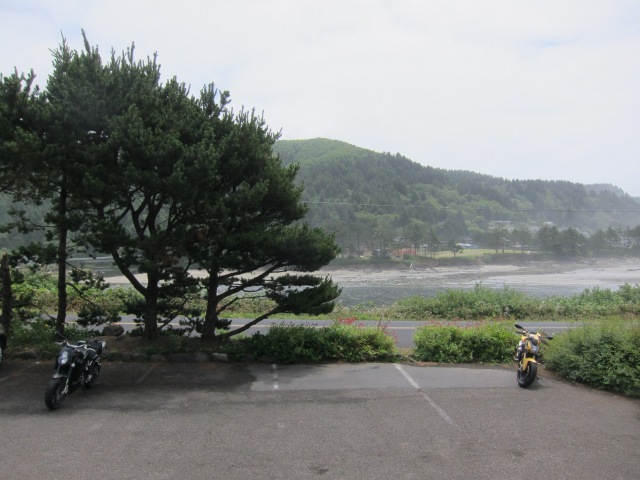 But in this case, his speed was very similar to mine and the idea of slow on straights and somewhat faster on curves was the same.  In the end, we were riding at a similar pace.

I didn’t take many photos during this trip. We were always on the move. Once back in Eugene we said our goodbyes and agreed to go riding again. His job keeps him away from Eugene a lot, especially during the summer (a job I would not have if it would keep me away from my bike in the summer), so it may be a while until we ride together again. It was great to know one of my soccer friends is also a rider.

During today’s ride the bike finally completed enough miles to complete the official break in period suggested by Ducati.

The ride was 232 miles long (371 km). Next ride report: checking out Oregon’s Triangle Lake, from above.

This entry was posted in Riding the Ducati and tagged Ducati, ona restaurant, Oregon coast, Streetfighter 848. Bookmark the permalink.

6 Responses to The Dog on the Roof