I’ve been looking for a while for the ideal vehicle for running my weekend, in town errands during the summer.  I thought about a scrambler type of motorcycle, but I’ve settled for classic 4×4’s.  They are perfect vehicles to drive without the top on a small town where traffic is light, slow, and usually non-aggressive.  It has been difficult to find one that was not restored, re-painted, modified, or that was not too rusty to bring back to life.  Then I came across this 1967 Jeepster Commando.

I’ll talk briefly about it on this post, mostly showing some of its key characteristics, and its state of conservation after 51 years of existence.  If instead of reading about it you just want to see it, I have a 4-minute video about it, the YouTube link is here (below).  If I might say so, it is a great short video, by far the best video I’ve ever made (which may not mean anything since the bar is set very low).

My short list for searching this type of vehicle included four main types of classic 4×4’s: Ford Broncos; Toyota FJ40s; International Scout 80s (I considered the 800’s as well); and older Jeeps (CJ5, CJ7 and Jeepster Commandos). Ford Broncos have mostly been restored or are simply too expensive. Thanks to Jonathan Ward (Icon) and others, such as Classic Ford Bronco, old Broncos in original state are hard to be found, since these companies locate bodies across the country and turn them into expensive, but gorgeous builds. I’m not criticizing them, by the way, as I admire their gorgeous creations. Just that their work has certainly inflated the market. 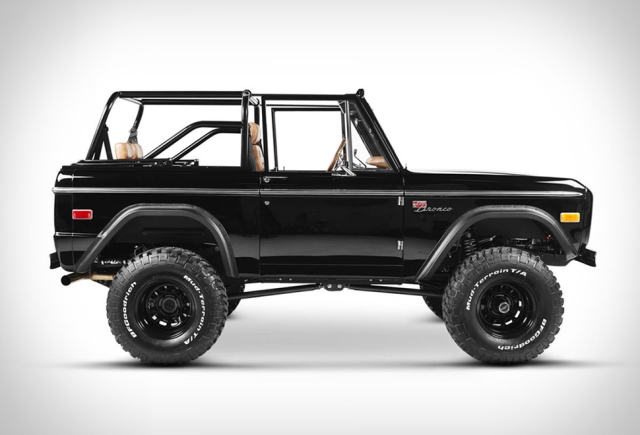 FJ40 Land Cruisers in general are too expensive as well, when they are not rusted through. They are also part of Jonathan Wards builds under the Icon brand.  The below version is not one of the Icon FJ40’s, but it shows the lengths people go in rebuilding these vehicles with the highest standards of quality, because enough people are willing to pay top dollars for these vehicles.

Then we go into the classic 4×4’s that have not reached the stratospheric prices yet, the ones that are within my limited budget, which are the International Scout 80s and the Jeeps (CJ5, CJ7, and Jeepster Commandos).  Although their prices are not as high as Broncos and FJ40’s, Scout 80’s in good running order and not restored, repainted, or modified are rare.

I found this repainted one (photo below) near me in 2015 and almost made an offer.  The repaint job was fresh and nice, but the owner, who claimed the vehicle to be a barn find, did not share any pictures of it before the body work.  To me, it would had been more valuable in its barn find patina. So I passed on this vehicle after several days of back and forth on the pros and cons of a repainted classic.  It was a really good vehicle and I did look back as I walked away from it.

So lets go to Jeeps in general, they are less rare, lots were made.  CJ5s and CJ7s are but difficult to be found in unmolested state.  I’m not against modifications, mind you, but they are mostly modified toward a direction with which I do not quite agree, and to an extent that makes it almost impossible to bring them back to their natural beauty.  Jeepsters, on the other hand, still can be found with a good price, and you still can find some good, mostly original examples, as is the case for my 1967. So, when I came across this one, and the previous owner was nice, very frank about its shortcomings, and clearly someone who understands the value of such classic vehicles, and who wanted to be sure the next owner was not going to cut it out into something else, it was difficult not to settle the case and make an offer and ship it back home.

It is not without little problems here and there, what do you expect from a 51 year-old vehicle, right?  But overall, I consider it perfect for what I wanted and it drives good.  I will start making some improvements here and there, mostly to keep it in good and safe running order. The Buick 225 (3.7 liters) V6 Dauntless engine is one of the highlights of these vintage of Jeep vehicles.

It has 160hp and 235 ft/lb of torque. It starts right up but it needs a tune up. It seems to be running rich, the idle is a bit high, and it backfires.  I will look into the carburetor, it might need a rebuild, will also look at possible vacuum leaks.  I will check the alternator, points, and the timing. And I will review its somewhat recent brake job. 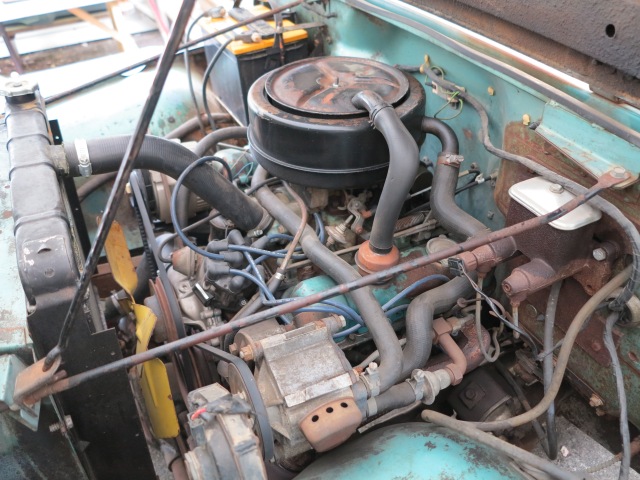 It has an airpump to recirculate engine gases

The transmission is a manual three-speed.  It is more like first, second and fifth, as there is a large gap between the second and third gears.  This large gap between 2nd and 3rd  allows the Jeepster to cruise effortlessly on the highway at 60 mph.  But if you encounter steep hills, steep enough where 3rd gear might be too tall, you will have to substantially slow it down to be able to operate on the much lower second gear.  All in all, this gear box is not perfect, but it works and makes for a great experience, I consider it to be the source of fun and adventure when driving around town. 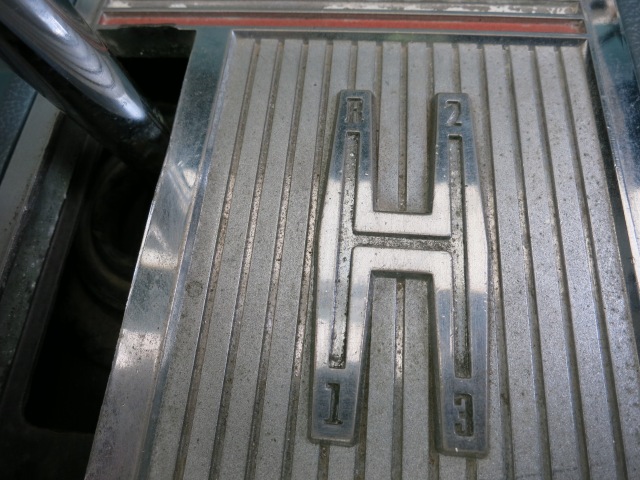 Dog leg set up: first down, two up on the other side

And it is a 4 x 4, with Warn manually locking hubs. 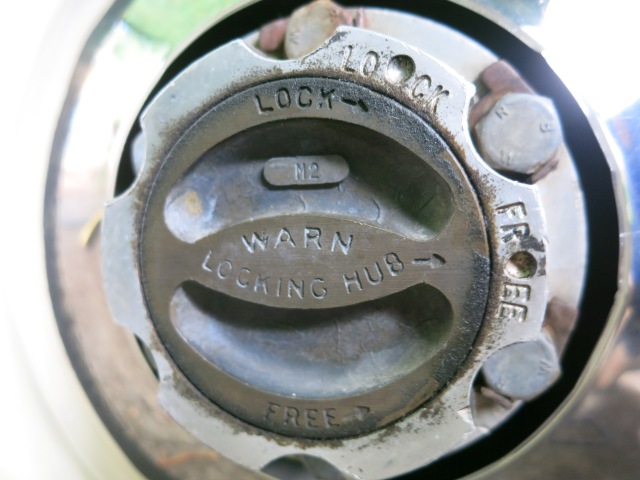 In terms of the body, it looks pretty good. Of course, it has surface rust, but I actually like it the way it is.  Some people go through the effort of creating fake patina.  This Jeepster has it naturally.

The frame and floors only have surface rust as well.  All is good! 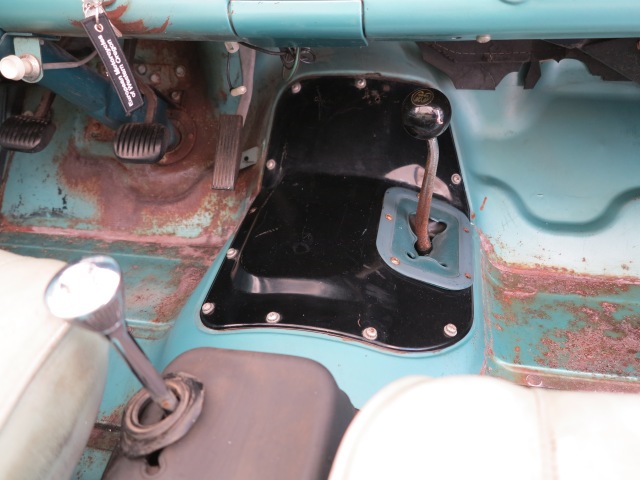 The previous owner had gotten an estimate to repaint the entire Jeepster, I can still see the markings made by the body shop as they located areas that needed more attention before it could be painted.  Thank goodness he did not go through with it, as, in my opinion, it would have devalued this Jeepster, like it devalued the Scout 80 I almost bought, in my humble opinion.

I removed the top with the help of a friend.  We managed it, but it was heavy for two folks, when the time comes to put it back on I think the operation will need at least one more person.

To preserve the patina, there are a few methods discussed in the “internets”.  Some people just wax and polish their vehicles, others lay a clear coat on top of everything, making it very shiny. I opted for treating the body with boiled linseed oil.  According to the few people who used this method, each coat lasts about six months, so I will treat it again before retiring it for the season at some point this fall.

Boiled linseed oil: Although designed for wood surfaces, it works with painted metal as well. Be warned, the rags you use to spread linseed oil on a surface (wood or metal) may self combust as linseed oil evaporates! Read the instructions if you decide to use this type of product.

Boiled linseed oil will leave the surface somewhat shiny and oily, especially right after application.  But it will also give a bit more depth to the color of both painted and rusty surfaces. 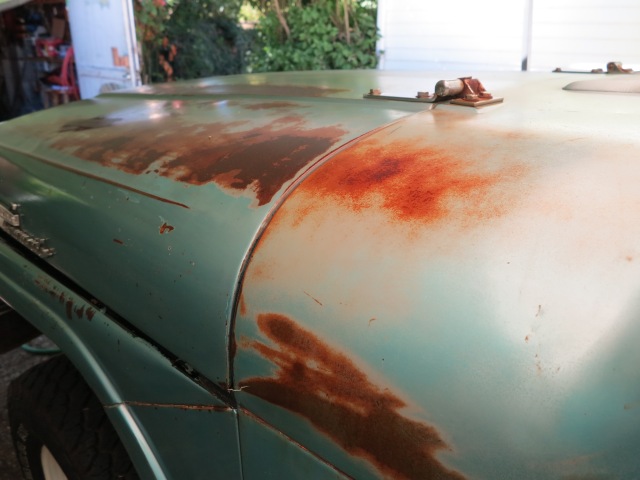 Oily shine right after the application of boiled linseed oil

Anyway, this is my classic 4 x 4 for summer drives in town, my 1967 Jeepster Commando. 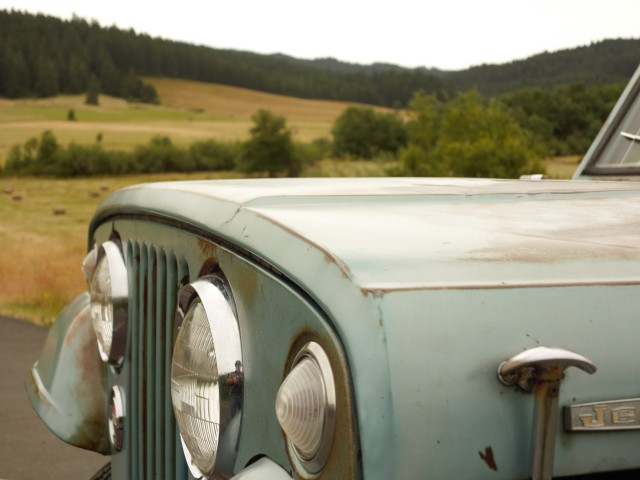 It is quite the vehicle, full of character, lots of fun especially when topless, and gets the attention, many waves, thumbs up, and curious looks from people the that come across it.

Maybe not.  Thank you for reading!

2 Responses to My 1967 Jeepster Commando