A KTM, a Ducati, and a Yamaha walk into a mid-size adventure bar…

Posted on September 3, 2016 by cesardagord

To see a KTM or a Yamaha in such a club, that’s not a big deal, you would expect those guys to be out there. But a Ducati?  If the Multistrada Enduro was not enough of a surprise, not only for the bike itself, but for the positive reviews it has been receiving, now we have rumors of a new dirt-oriented Ducati motorcycle of the Scrambler Ducati variety.

As posted here before, it seems more like an enduro oriented version of the Scrambler, a bike with actual capability for off pavement riding and travel, and likely with the 80occ L-twin motor.  Some claim or want the 1,100cc motor on this bike, to me, it makes most sense to have it with the Scrambler, 803cc motor, and be it a bike squarely directed at the sparse mid-size adventure market.  Overall, it seems, Ducati is diving head first into the adventure world.

Let’s be reminded, Ducati has tried their wheels on dirt and sand and managed to win. Those were the days of the Cagiva, with the Ducati L-Twin motor, and their days under the sun, winning the prestigious Paris-Dakar race.

Then we have the rumors about a Yamaha mid-size Ténéré, with the 700cc parallel twin, 270 degree crank motor. Following the launch of the Africa Twin, which to most was a hit but to some a disappointment when it was learned the bike tipped the scales above the 500lbs mark, this idea of a mid-size Ténéré has become very popular. It would be another candidate for the potential mythical, lighter weight but still adventure capable machine people seem to want.

Is this Yamaha’s mid-size adventure Ténéré?

Yamaha has struggled to make their 1,200cc Ténéré gain the space it deserved in the market as the competent large adventure motorcycle that it is.  Its relatively low sale volume is a puzzle coming from a motorcycle that has the name, Ténéré, which has been traditionally associated with winning Dakar, it is a capable round-the-world adventure riding machine. Add to it Yamaha’s reliability and you would expect a winning formula.

Instead bikes sell at discounted prices. The speculation has been that Yamaha fans wanted a lighter weight Ténéré, a bike to replace the single cylinder 660 with a parallel twin motor, similar to the original  Ténérés, instead of a 600lbs + machine.

That is, people may have been wanting a mid-size 700cc version of the Ténéré, using the 75 hp parallel twin motor, with the raved 270 degree crankshaft, which is available already in a few other products.  This motor has been receiving plenty of positive reviews, and such a bike, built around this light and compact motor, could be the ticket.  It could be a serious contender for off pavement riding.

Last but not least, we have KTM’s 800cc parallel twin motor.  This has been more than a rumor, as this motor has been on an official announcement from KTM. Although this motor is expected to appear first on street bikes, likely on a 270 degree crankshaft, the real speculation here is whether it will find its way into an adventure motorcycle or not. 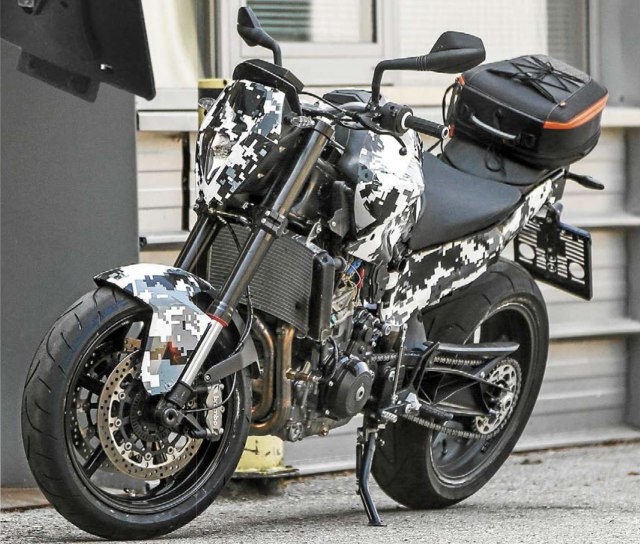 KTM used to produce the 950 and then 990cc Adventure motorcycles until a few years ago. Then they moved to the BMW GS world (bikes around 1,200 cc) with their 1190 series.  Who didn’t want to try their odds at the most competitive and lucrative portion of the adventure market, right? Full circle, there is the Ducati Multistrada Enduro, the latest entrant to that still growing full size club.

For many, though, the 1190 was a solution to a problem that did not exist, they miss their beloved 950-990 bikes.  An 800cc from KTM could be the replacement to the missed V-twins nut on a more compact package using the parallel twin motor, perhaps lighter than the V-twin bikes, but likely rated at the same power as the missed line of V-twins. Perhaps this new bike will be a rally or enduro ready machine. Ready to race, tight?  That would be something to almost match their own 700 cc single in dirt performance but beat it in long distance travel comfort and reliability.

Of course, we have had the BMW F800GS for many years already, and it has been quite a successful motorcycle, suffering only evolutionary changes since its launch in 2008. It was the starting point of this segment. And the Triumph Tiger 800 XC and subsequent models, which followed the BMW coming to the market in 2011 have been there fr a while as well.  Both these bikes were or still are very popular in the adventure riding world as a lighter alternative to the 1,200 series of bikes.  They don’t sell as well as the large bikes, thought.

That’s where these new bikes speculated from Ducati, KTM, and Yamaha seem to fit, hopefully they will be geared to an even lighter end of this spectrum. That is, maybe, just maybe, the time has come when we will finally have more adventure bikes with real enduro aptitude, bikes that will be fun to ride on dirt at speed, my bias, and fit that elusive multi cylinder mid-size gap.

That’s the gap, the gap that has brought to us adaptations to existing bikes to fill that vacant space, such as my own Honda CB500X, with its Rally Raid Level 3 package.

Let’s see if there is a punchline to the KTM, Ducati and Yamaha’s entrance to the mid-size adventure world.  Although I really enjoy my CB500X, and it is the bike I actually want to ride when the plan is ride around town and on off pavement adventures, the 25 extra hp that a similar packaged Ducati or Yamaha could deliver is something to pay attention to. An extra 25 hp makes a difference, especially if these new bikes weight the same as the CB500X.

KTM, if tradition is followed, is likely delivering something with a bit more power than 75 hp from its 800 parallel twin motor and certainly will be reasonably light and hopefully with the “ready to race” attitude.  Either way, it seems we will have the options we have been wanting and speculating about for several years already.

However, if Ducati delivers something interesting for this segment, that will be the real punchline to this story. It would be an example of real change coming from the unsuspected group of guys.

3 Responses to A KTM, a Ducati, and a Yamaha walk into a mid-size adventure bar…