The Honda CB500X Adventure – Part 2: Setting up the shop and parts shopping

How many times I stared at this ad which is found on the last pages of American motorcycle magazines, where this Harbor Freight, made in China, Pittsburgh brand motorcycle lift is available for US$299.99.

Has anyone ever paid the “official” full price on this thing (what ever it is)?

I never bought it until now because I would likely not use it, I thought, or I wasn’t going to honor the idea of a having a lift in my garage if it was only to be used for oil changes, even if it is an inexpensive Harbor Freight lift.  At the same time the oil changes and air filter maintenance have been done with bikes on center stands too low to the ground.  The idea of building the CB500X into the adventure bike and the other reasons discussed earlier helped with the decision to finally buy this thing.

Dragged the thing out of the truck using my motorcycle ramps, a car jack, and a pulley

I decided to paint the table of the lift, so now it looks like an upscale version of itself, version 2.0. Well, I do think it looks better in gray.

The wheel chock that comes with these lifts needs an upgrade as well.  I used another Harbor Freight / Pittsburgh (what a team) part, and now it works very well.

Haror Freight lift version 3.0. It struggles a bit to lift the Tiger 800 XC, but it gets it done.

I like this chock, once you have the bike stable on the lift, if you need to work on the front of the bike, clamp the rear wheel down, you remove the front wheel clamping structure of this chock.

Now that I have the lift, I realize it is such a fun tool to have at my disposal.  I will use it to do a much needed oil change on the lawn mower, for example! Can you see the fun of having it on any shop?  It turns the shed into a shop in the first place.  If for anything it adds another work bench to the shop, even if I never use it to work on my bikes again.

On motorcycle forums everyone always find a point of disagreement on anything, from tires, to oil, to ABS, to motorcycle brands and even to things you think everyone would agree on.  Well, there is one exception just to make the rule: everyone agrees Harbor Freight tools are the lowest in terms of quality.  Their prices are ridiculously low as advertised, the reason for the low price, though, is different than what they claim.  It is the quality thing… everyone agrees, that’s a joke.  You have to have a good sense of humor to buy and use these tools. But you know what?  Most of the time they work.

Tools sourced from Harbor Freight, some from Home Depot.

Yes, I have a little cemetery of broken tools somewhere in my shop.  But then, the store is a couple of miles away, I just go back there and buy a replacement one.  On the other hand, some of their product selections will work really well, like this $29.99 chair I bought at Harbor Freight.  It is doing well, staying out on my office’s deck after 10 rainy winters so far.

As a bonus, when you walk into a Harbor Freight store they will have plenty of staff answering questions, they seem to know their stuff, and they are likely to have any tool that you need as specific and out of the ordinary as it may be.  Yes, I wish my shop was furnished by Snap On tools. But the Pittsburgh and Husky brands have been good to me.

Back to the lift, another good thing is that once you are done using it, you can move it out of the way, tuck it on the side of the shop on its side, and we can even park the car inside the shop.

Lift tucked away, on its side, car can be parked in the garage when lift is not being used

That was that for setting up the shop: I got the lift, I painted it, I got a better wheel chock, and it was ready for action.

Now for the most important element of the project, shop for parts for the bike.  The main item was the Rally Raid Products, Level 3 kit for the CB500X. It includes inserts for front suspension adding two inches of travel to the front forks, a rear shock, triple tree, spoked 19-inch front wheel and 17-inch rear wheel, extended side stand, front fender, and dog bone.  Bike gets an extra two inch of suspension travel and height.  Please note, I just checked Rally Raid’s site and they are selling this kit as they make them and there is a back log on the wheels. I got mine just in time, I realize… 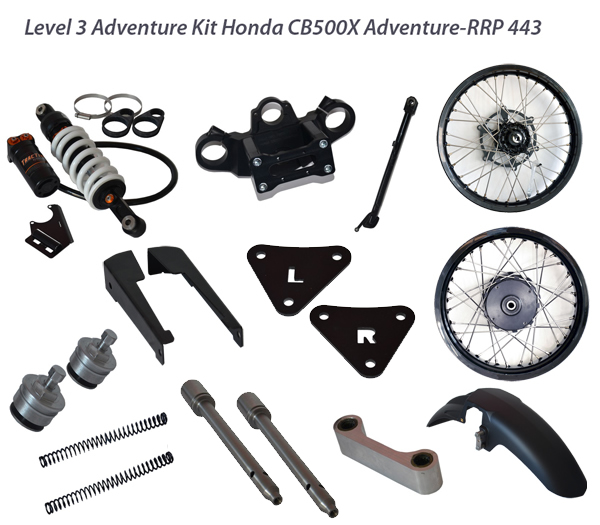 I also ordered a smaller slip-on exhaust (Leo Vince Corsa), luggage side racks (SW Motech), bark busters (Storm), and a tail tidy (R&G). I think that was it.  All suppliers were timely on their delivery of products.

Rally Raid came via FedEx, Giant Loop is just around the corner from me, world map speaking.

Rally Raid kit, three boxes, came via Fedex, the rest via UPS. Everything delivered on time and as promised. 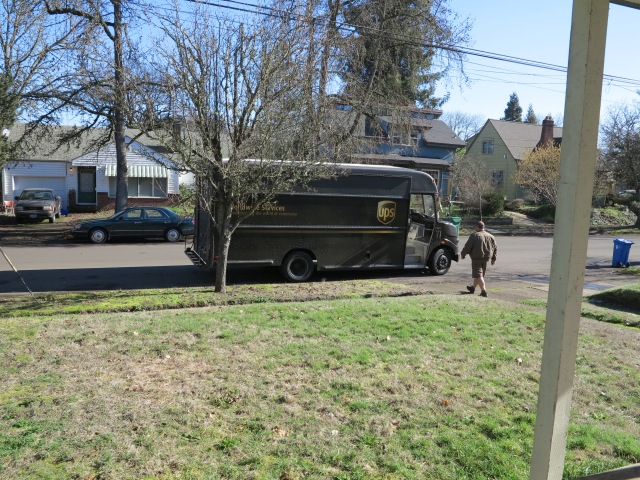 The pile accumulated at the shop, and in between work travel, my evenings and weekends were dedicated to the building process.

Lots of goodies for the CB500X

There were a few other parts to complete the CB500X adventure project that were not available at the time I  was building the bike. One of them was a radiator protector (always on back order), so I built a temporary one which is staying for time being, very important item if you will ride this bike off pavement, especially on gravel roads! Another one is a headlight protector, that one I still haven’t ordered now that I know of a potential source – that’s the only item missing to complete the project as of now. I also built a GPS mount using the windscreen structure as a base and built an inner fender for the rear wheel to protect the shock.

On the next post of this series I will document the building (disassembly / assembly ) process.