Happy Hour in the Wine Country

I’ve been mostly riding on Sundays.  But it is possible to organize work so that I can leave the office a couple of hours early and ride to nice places not too far from Eugene under plenty of day light, on a regular week day.

I connected with another rider via the local Triumph network and we decided to go for a ride.  After a quick back and forth we agreed the best time was Tuesday. She rides a nice Triumph Bonneville T100. 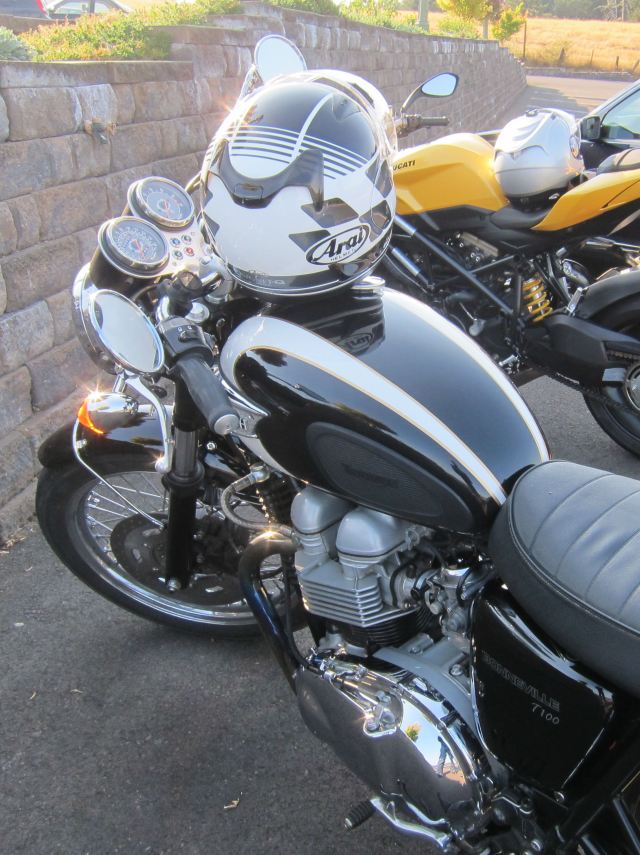 It was going to be a short ride, but I know routes that quickly take you out of town and places where you are not too far from town but which give you that complete country and farm perspective, and with roads that are perfect for a nice and relaxed ride.  And to me at this time of the year there are no better places to visit than wine country. Which is almost everywhere not too far from town. We ended up at one of the local wineries to drink some water and soda. The tasting room staff didn’t seem too puzzled by the fact that we did not taste their wine – this was an alcohol free Happy Hour to help keep safer odds on the ride.  This winery has a nice outside seating area, where you can enjoy the views of the valley. 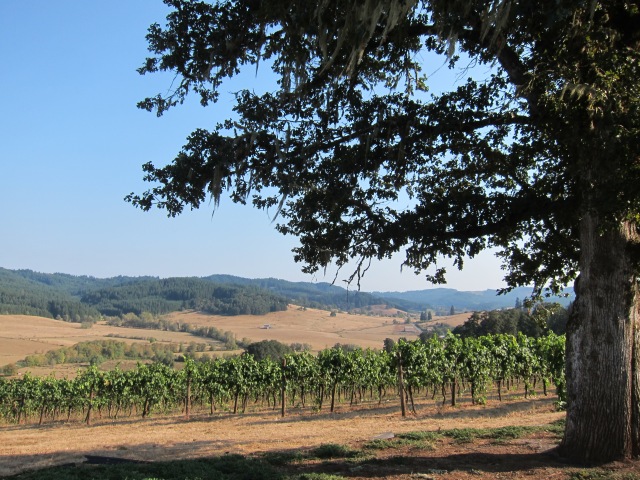 A nice and perfect view. A taste of late summer in the valley. September 18, 2012

On the picture above you can see a bit of the road that goes through this area, one of my favorite roads in the area. It has a nice set of curves on the way in, it has great views of the country and the farms when it gets to the open areas, and only very few people travel through here.  Seating on this outside area, with this great scenery as a background, a nice conversation and company was great.  I would perhaps rate it even better if I could be tasting their wine, but then I would not be riding. Soon these vineyards will be harvested and a new cycle of wine making will start. We continued the ride. Next stop, King Estate winery. 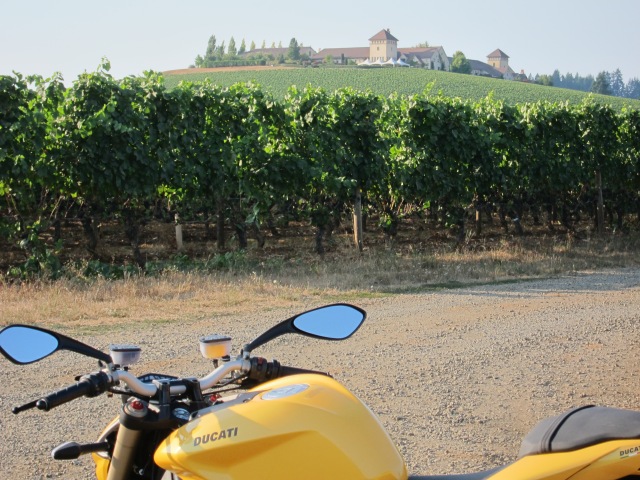 We continued on for  several more miles in that area before directing our bikes back to Eugene. On the way back her bike arrived at the 10,000 mile mark and we stopped to document it.

Soon we were back in Eugene and had a nice 10K mile celebratory dinner at Meiji’s.

Ending the ride with dinner at Meiji’s – the Ducati and her new Triumph friend. September 18th, 2012

In summary, it was a nice ride, at a nice time of the year. And a very good reminder of what makes Eugene so nice for riders in the summer. Although it was only a 72 mile (116km) ride, most of these miles were in beautiful landscapes, never too far from home and on a relaxed pace. After dinner I still had time to participate on my new soccer team’s league match, scoring my first goal for the team (even if it was on a 7 x 0 victory which potentially washes down the value of my goal).

I can only call this a very nice day. It included an alternate definition of Happy Hour.

This entry was posted in Riding the Ducati and tagged Ducati, Ducati Streetfighter 848, Izakaia Meiji, Oregon Wineries. Bookmark the permalink.

4 Responses to Happy Hour in the Wine Country