You might be wondering: is this guy still riding? The answer is: as much as I can!  The problem is “as much” has been “not much” due to my “day job” and work-related travel.  When I get to ride, however, it is all about quality miles.  Also, it is important to note that between riding and writing, if my time availability is reduced, I will ride more than I will write.   Now that this riding season is slowly coming to its end I will start writing more – I have a few articles on draft, including my ride and review of the 2016 BMW 1000 XR. 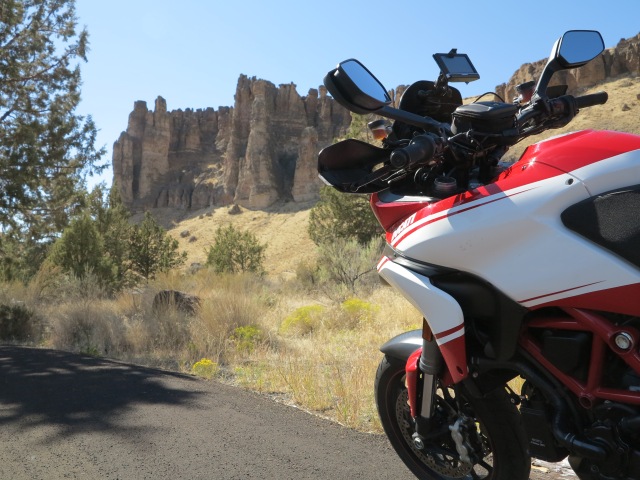 The Multistrada near Fossil, Oregon. September 2015.

Although I didn’t ride much this year, when I went riding it was mostly on board of the Multistrada, which reached 10K miles a couple of weeks ago. 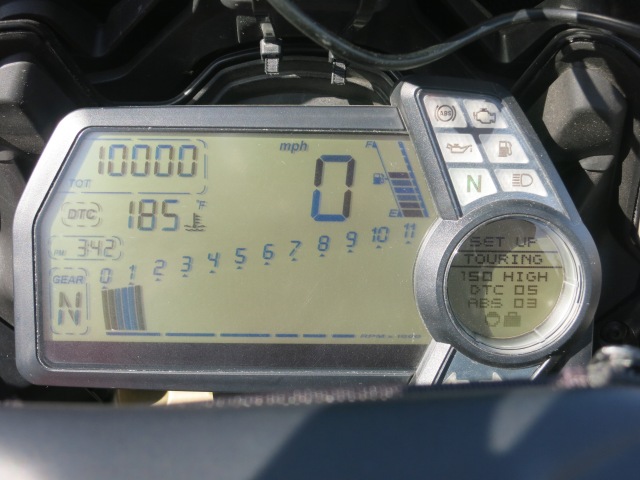 Two years and 10 thousand miles later it makes for a good opportunity to talk about this machine and answer three main questions: 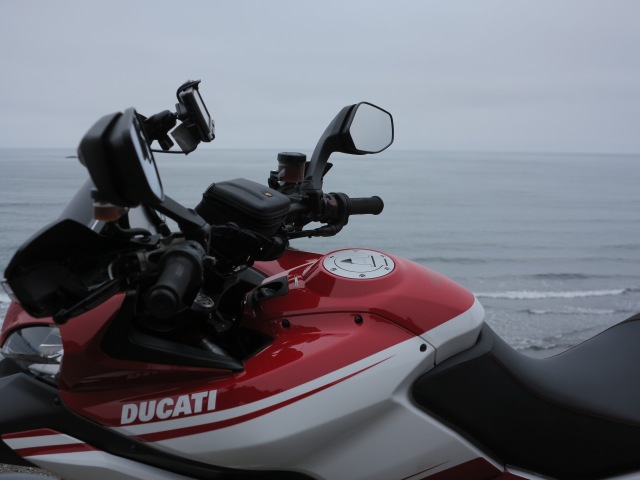 The Multistrada on Hwy 101, a regular hangout for this bike

What is this bike all about?

How would I summarize it? The phrase that best described this bike by the journalists who rode it in the past was “this is a great sport touring machine, emphasis on sport.” I’ve endorsed those words when I first rode it, I endorse them now, two years later. 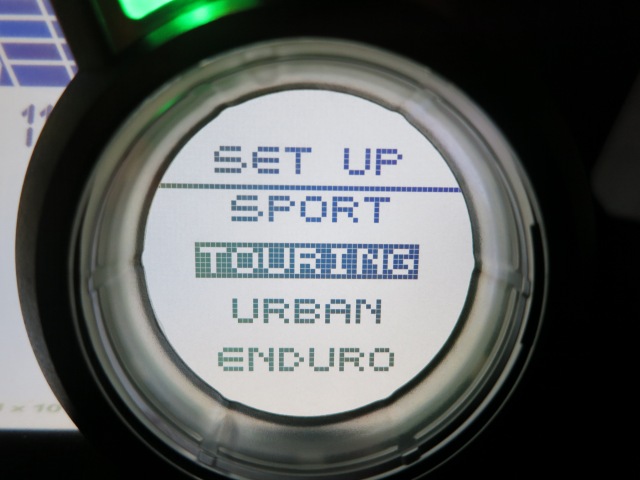 When Ducati introduced this bike in 2010 it was new in many ways, including the concept of the four riding modes, with choices of performance maps and suspension settings that a rider could actuate from the touch of a button.  Ten thousand miles later I realize I’ve been almost exclusively riding it in Touring mode, but I enjoy its sport, urban and enduro elements. 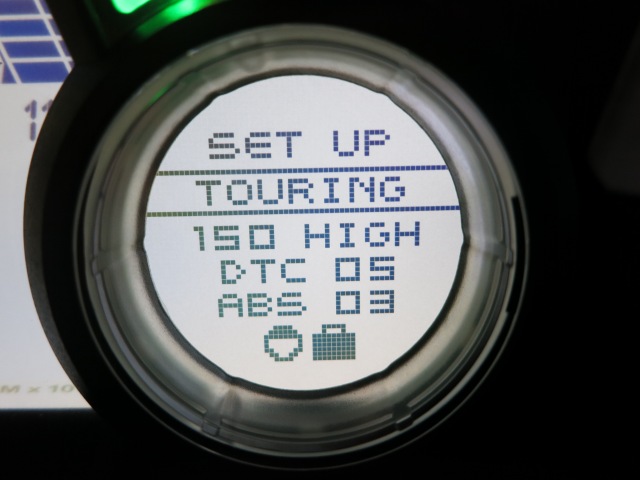 Touring mode, at 150HP, with “high” acceleration, and load set up for rider and gear

Enduro in my opinion is not about taking this bike on dirt trails as the word would imply.  Although I’ve taken it on some gravel roads, and it does it reasonably well, I’ve never actually used it in Enduro mode.  And I don’t hear much about other Multistrada owners taking it off road either, although some do.  However, a 100% of the time when I’m riding this machine I’m enjoying its Enduro elements.  How so?  Enduro is what makes this bike what it is: a tall bike with upright ergos and long suspension travel with wide handlebars.  The bike is shaped like an enduro machine, stylized perhaps.  It is what makes this bike’s counter-steering so light, making it a great and fun canyon carver, bringing agility to a somewhat large and heavy bike. 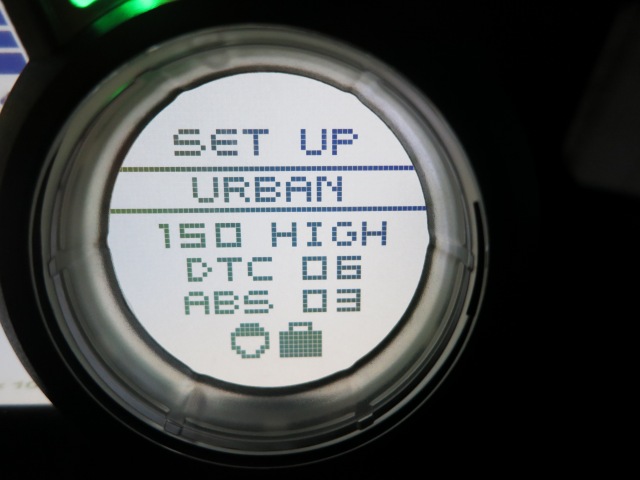 The agility though is not translated as much into the Urban mode if you take into account stop and go traffic, getting in and out of parking spaces, the typical urban riding. Its Urban contribution has been to me its weakest mode because of the bike’s size, weight, gear box ratios and engine stability a low RPM.  It is important to note the improvements with the twin spark motor of this bike, and the new DVT motor is considered to have finally solved this issue.

But I’ve used the urban mode on a few occasions. Mostly when the roads got rough and I could get the Sachs semi-active suspension to work on its softest setting and have the bike float over bumps and potholes.  I also used it on the rare situations when I encountered traffic on my travels and wanted the bike lowered for better access to the ground.  It is worth mentioning that I really don’t like the 100 HP default engine level for Urban mode.  In fact, I don’t like the 150 HP Low either.  Whatever mode I’m in (Urban, Touring or Sport) the engine management is on 150 HP High, where I get the crispiest response from the smallest throttle input. It is just the way I like it. 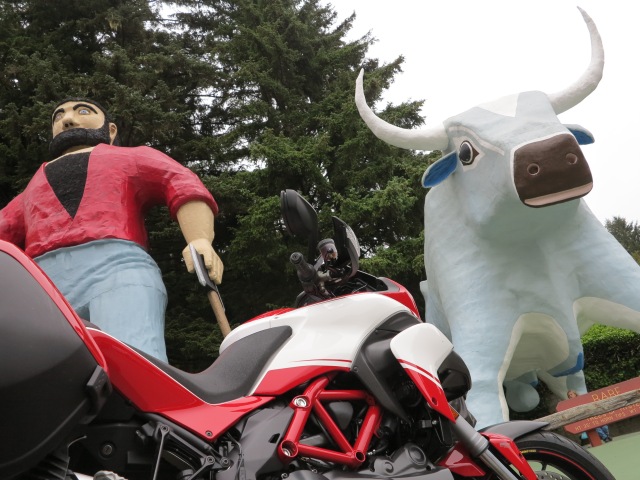 Touring mode is where my bike is ridden almost all the time, where it offers a good compromise between performance and comfort.  The particular setting for this mode is not what makes this bike a touring machine to me though.  In my opinion that comes from the bike’s capacity to carry travel gear on long distance travel, how motor and suspension work so well and how effortless it feels even when the bike is fully loaded.  The upright seating position helps as well.  It makes this bike a perfect machine for 400+ miles days.  I usually only stop because I either reached my destination or because I ran out of time because I had to stop too many times to take pictures of the beautiful locations I’m visiting. 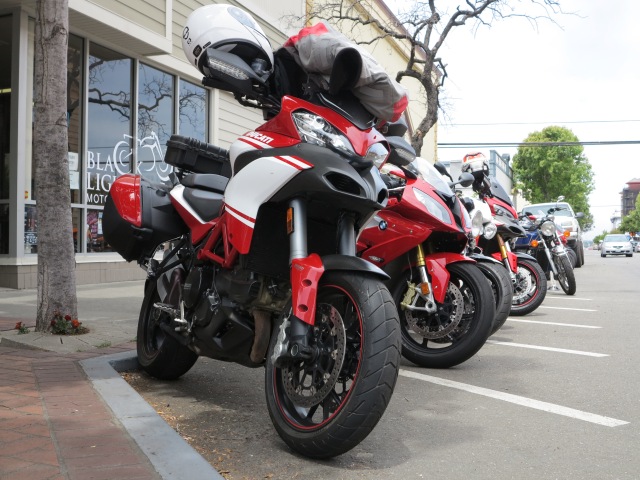 Bike with bags at the Black Lightning Cafe in Eureka, CA. June 2015.

Finally there is the Sport mode.  Again, my opinion is not to think about the mode’s setting itself to describe what this bike can do as a sport bike despite that it adjusts the suspension for sport riding.  What makes it a sport bike in my opinion is its motor.  Its power and power delivery are addictive.  As I mentioned earlier, although my bike is mostly on Touring mode, I have the bike 100% of the time on the 150 HP High. Not that I use it to the limit in terms of speed, but I do explore the acceleration that is just phenomenal, and the prompt response it delivers to throttle input. And the sound of the v-twin motor above 5k RPM is pretty much part of the fun.  I confess I use a helmet cam on some of my rides on this bike and on occasion I’ve played videos back with headphones when squeezed on a tight airplane seat on work related travel.  I close my eyes and enjoy the music, guessing the RPM engine, the gear, the type of curve I’m riding until I fall asleep.  What a sweet motor. 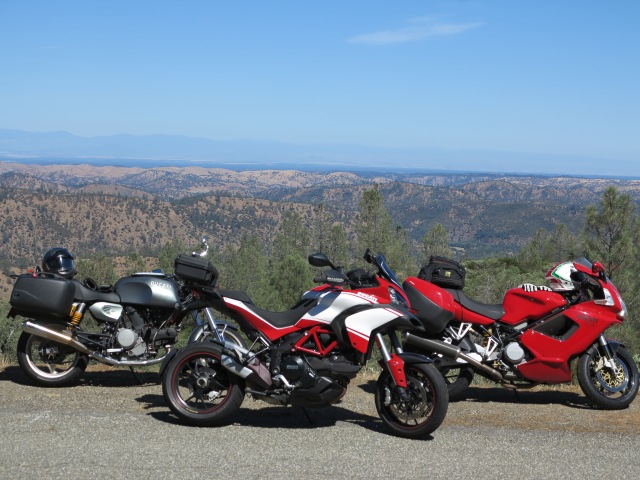 To summarize, this bike to me is an enduro styled machine, with a sport motor and which is capable of touring long distances in comfort.  The four modes? They help define this bike’s touring aptitudes, when what changes from mode to mode are the suspension settings and the traction control levels, allowing the bike to be ridden from faster (Sport) to comfortable (Urban) with Touring as a medium set up. Sport Touring defines it well for me, with some emphasis on sport.

One note about wind management:  As you can see on all my photos, I use exclusively the shorty carbon wind shield. I tried the taller shield and all I got from it was loud wind buffeting.

The short windshield and the front fairing still provide arm and chest protection, but keeps a cleaner wind flow at the helmet level.  Wind management is a challenge on tall motorcycles, where the rider sits at a distance from the shield, fairing and mirrors which cause buffeting.  Of all adventure and enduro styled bikes I’ve tested, the only one that works reasonably well on this department is the 2013 and newer BMW R1200GS, the liquid cooled machines.  The Multistrada’s short carbon screen works reasonably well for me (keep in mind that everyone’s take is different on this matter). 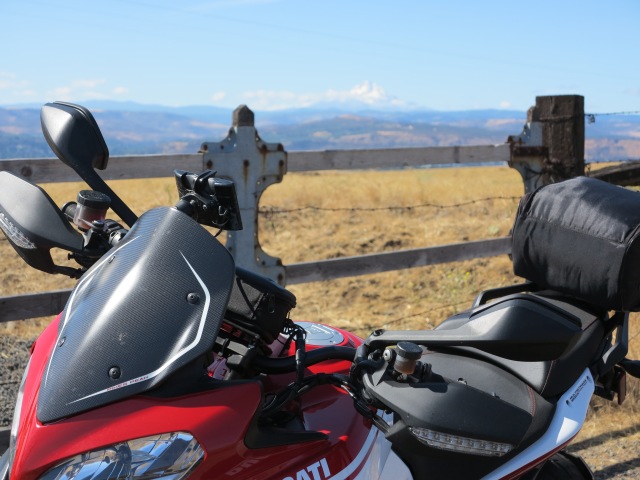 How did the bike perform?

Let’s check the numbers.  During the more than two years I have had this bike, and its 10 thousand miles, these are the main stats: 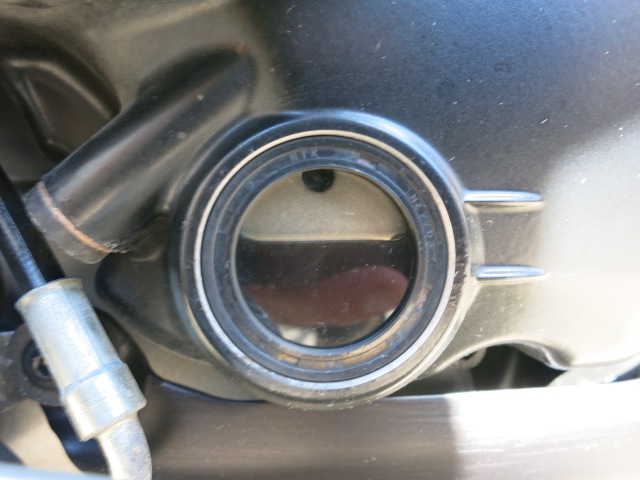 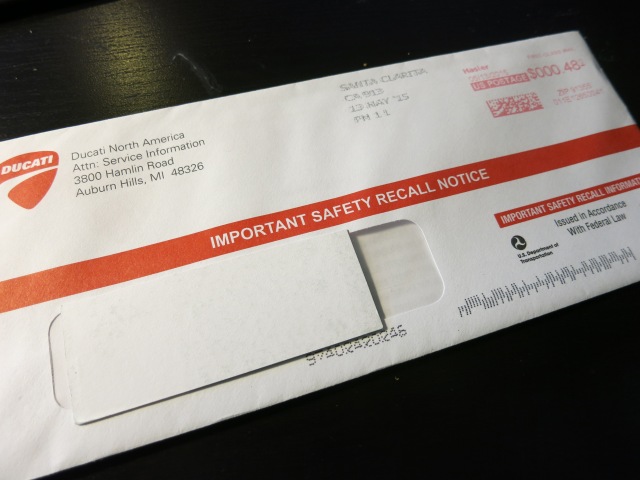 This bike’s fuel consumption ranges from low 40’s to high 40’s.  Most of the time it is between 45 and 47 miles per gallon which has given me a consistent 200-mile range (if you can afford the last miles with the amber light starring at you and the miles to go counter approaching single digits). It depends on the type of riding you do. The lowest I’ve seen was 43 mpg, the best was just above 50 mpg. 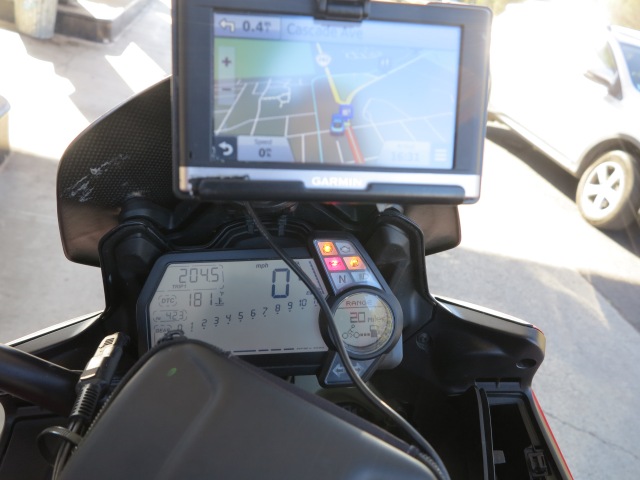 Lots of smiles, many mega pixels of pictures, and many hours of video. 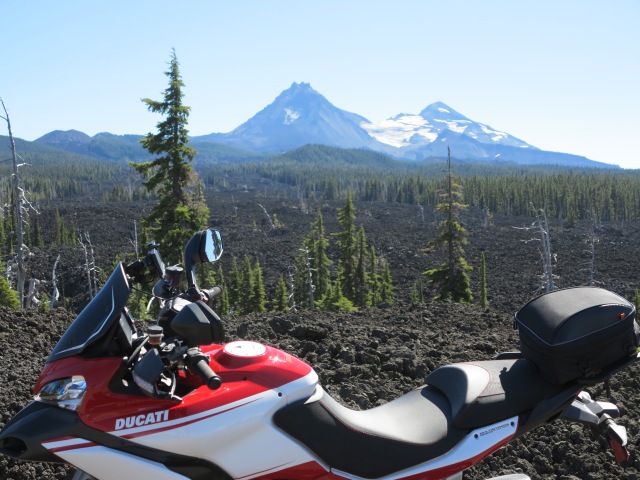 The Multistrada in the McEnzie Pass, September 2015

Overall I would say this bike’s operating costs were very reasonable.  Out of pocket expenses were tires, scheduled service (at 600 and 7,500 miles), and oil changes during the scheduled service.

Will I keep this bike?

Since the time Ducati invented this segment other manufacturers have brought bikes to the market that match or surpass the Multistrada in some criteria.  A few examples come to mind, like Aprilia’s Caponord, KTM’s 1190 Adventure, BMW’s 1000 XR, and MV Agusta 800.  MV Agusta, it is worth mentioning, for the first time enters the touring world with the Turismo Veloce 800.  Credit to the Multistrada success, I would say.  All these bikes have throttle-by-wire, riding modes, electronic suspension (either electronically adjusted or semi-active), with them being “touring” bikes built around a sport bike motor,  organized on an enduro styled body.  Just like the Multistrada. 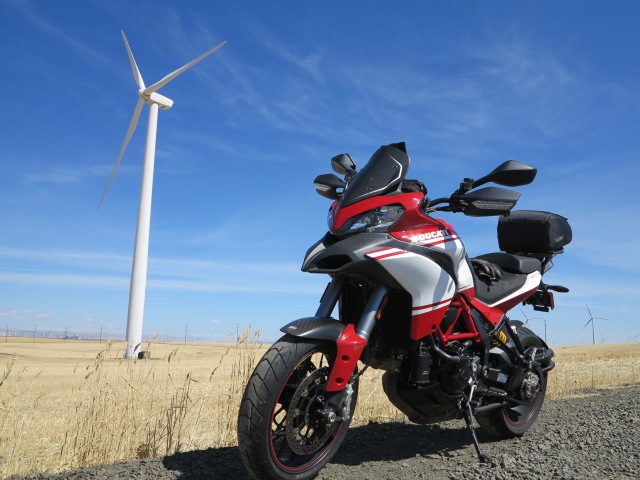 The 2013 Multistrada Pikes Peak. 10K miles, and 2 years later it still looks and operates like new.

The Ducati Multistrada carved its own “sport touring” niche in the  Adventure market and has become the yard stick by which other sport touring machines are measured against in this niche. Not unlike the BMW R1200GS in its enduro/adventure segment. 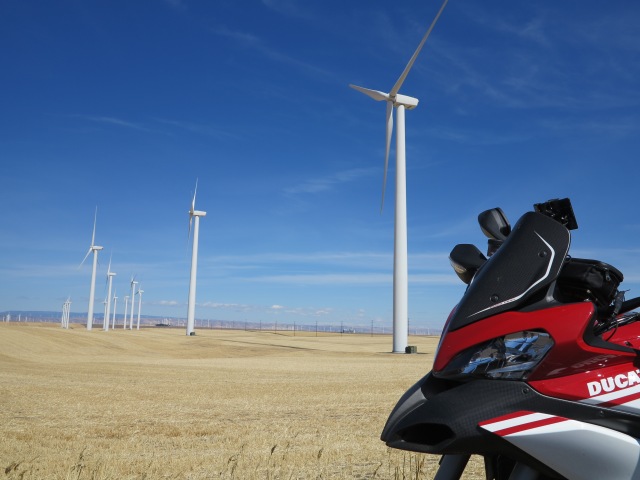 This picture reminds of Don Quixote 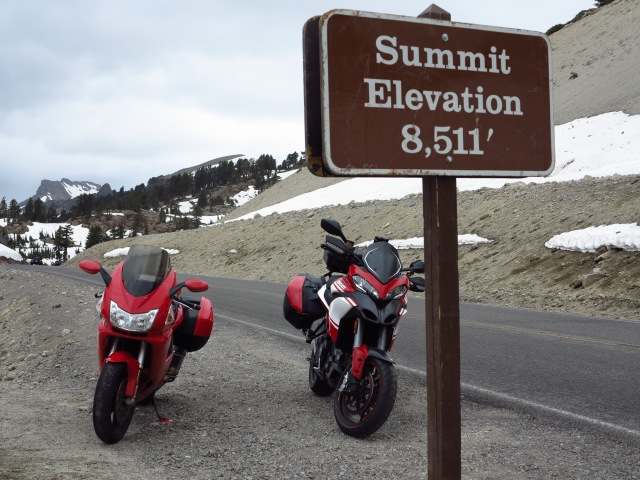 At the Summit, Lassen Volcanic National Park, June 2013, with an ST

In talking to several Ducati ST owners, you can hear their disappointment about Ducati ending the ST line in favor of the Multistrada.  But Multistrada sales and the new sport touring “adventure” (enduro styled) models being developed from other brands are telling a new story. The pendulum may one day swing back to lower profile sport tourers.  For now I’m enjoying this style of bike, and a lot of it comes from its tall stance. Therefore, I plan to keep such an adventure styled, tall, sport tourer in my shed. 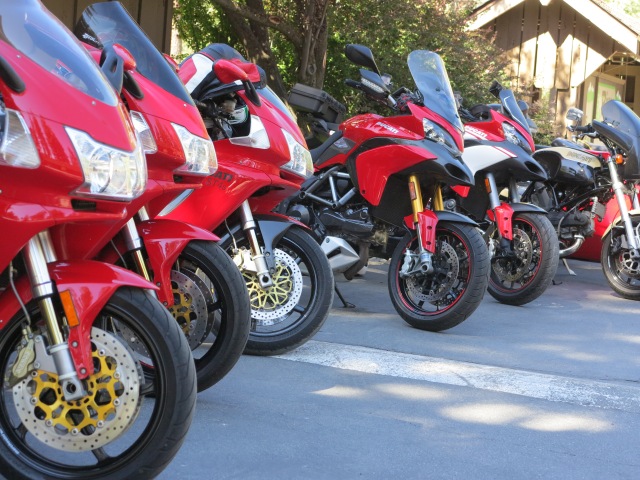 Will it be this particular bike, however? For now I have to say I’m very satisfied with this bike and I would buy it again if we were back in 2013 and there was nothing new, and I could count the 10 thousand mile experience I had with it. Besides all the objective data, it is a perfect bike for long distance travel, and it offers subjective characteristics that I enjoy on a motorcycle. 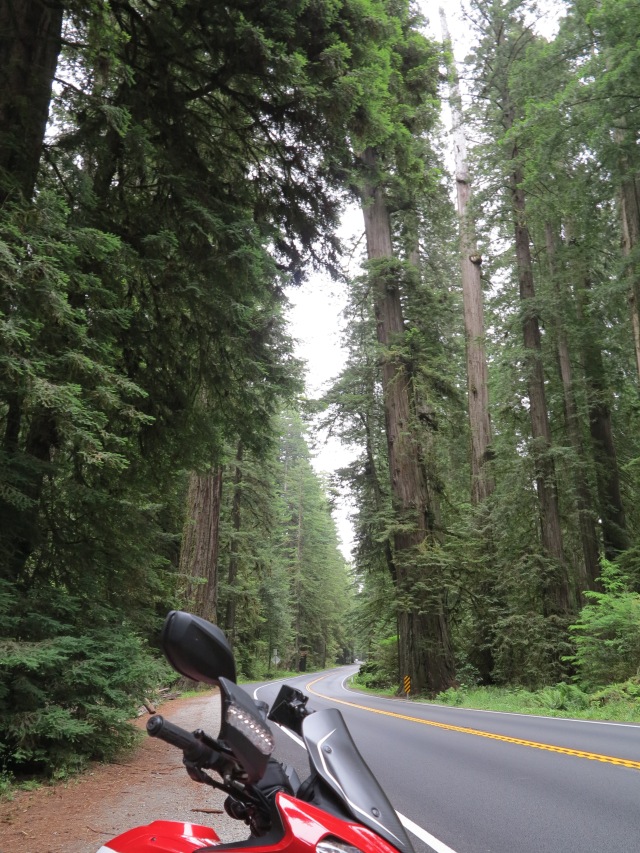 Riding among the giants – Redwood forests in California, June, 2015

However, things have been moving and I’ve been testing and looking into other bikes in this segment.  I recently tested BMW’s 1000 XR, which turned out to be a great machine.  I haven’t had a chance to try the new Multistrada with the DVT motor yet, but I have a feeling I will like it a lot.  And just recently I was invited to test the MV Agusta Turismo Veloce, which looks sexy and has a nice triple motor. I will soon report my review of the BMW 1000 XR.  Hopefully I will soon have material on the Turismo Veloce as well. 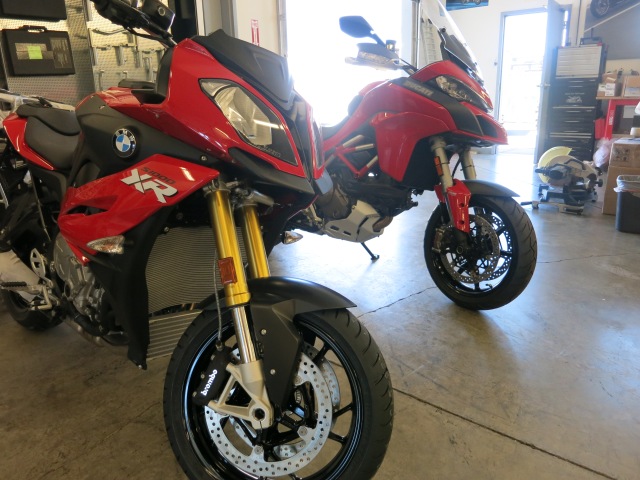 BMW 1000 XR and the Multistrada DVT

Will one of these new bikes out there displace my Pikes Peak because of performance, looks and overall riding fun? Stay tuned! 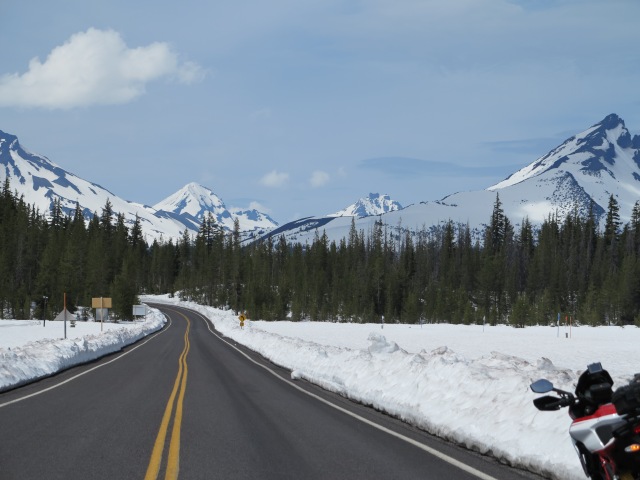 As of today, I’m perfectly happy with my Multistrada Pikes Peak.  It has given me more than what I expected in terms of performance and riding fun. I’m already thinking about the next time I will take it on a ride.