Perhaps this post is not going to speak to most readers. After all, we are all about the motorcycle itself, the riding experience, the specific characteristics of the motorcycle and here I propose to talk about something different, although still about motorcycles.  I’m an economist by training and besides my passion for riding I also have a passion for discovering and understanding what’s behind a success story.  I like to observe and study market trends and make projections from these analyses.  I like to study marketing strategies, dissect them to see how new ideas emerge, how they became mainstream. You have probably already observed a tendency I have to write a few words beyond the motorcycle itself and talk about the segment where the motorcycle resides, for example.

The point of this post is to go over Ducati’s 2015 World Premiere at the EICMA in Milano and discuss what I considered a lesson in marketing by Ducati’s CEO, Claudio Domenicali. It may not speak to you, or you don’t care about the Ducati brand. That’s all fine.  But maybe you are interested in knowing more about marketing strategies, corporate identify, product development? Claudio made it very simple and personal, touched all the critical points of the Ducati brand and family of products, good or bad, including the recent negotiations with the workers union in the Borgo Panigale plant.

You can see and hear the entire event for yourselves and reach your own conclusions. Below is the video from when the event was streamed life the day before EICMA opened to the public.  By the way, Claudio announced future world premieres will be broadcast on similar fashion as a way to better connect with the Ducati community.

Below are some highlights.

On all product presentations Claudio talked about the people at Ducati. He was talking directly to them, as well as to the Ducatisti around the world.

Some updates: Ducati now employs in Borgo Panigale and its subsidiaries in Brazil and Thailand, 1400 people.  Ducati started assembling motorcycles in 1946, Claudio announced that in 2014 Ducati assembled its 1,000,000th motorcycle. And in 2014 they will have delivered the highest number of motorcycles in a year, with more than 45,000 motorcycles projected to be distributed worldwide this year. He portrayed the company as a vibrant unit, a company in expansion.

He also celebrated the brand’s care about design, and its win of the Compasso D’Oro prize, the most prestigious prize about design, which was given to the 1199 Panigale in 2014, the first motorcycle to ever win that prize.

Before introducing the new products Claudio reminded the audience about the three values of the Ducati brand:

Claudio explained this new brand as an opportunity to expand the Ducati motorcycles to a different kind of rider.  Or even to non-riders, bringing the idea of riding to people who are not the traditional Ducati riders or even people who have never ridden before.

The vice president of marketing  introduced the Scrambler motorcycle by telling its history, from 1962, when the Scrambler was born as a request from an American motorcycle distributor, to 1975 when it stopped being made.  He described the values of the 60’s and 70’s, and how these values are extremely contemporary today.  He sold the product itself and its vast line of accessories, more products, which will allow this motorcycle to be customized from four starting points (the Icon, Urban Enduro, Full Throttle, and Classic models).  And beyond that he presented the line of clothing, riding apparel, including helmets that will be sold with the new brand.  This is a large investment, and I have a feeling it will pay off. They mentioned this is a starting point for something that will have a long life within Ducati.  They are certainly energized by this product.

One interesting comment to make about the Scrambler is that people in motorcycle forums have discussed how small the Scrambler seems to be or really is (some people have already seen it life).  When the four motorcycles were brought to the stage during the premiere, they were ridden by four guys that have been directly involved in the bike’s development (accessories development manager, project manager, engineer and designer), and they all seem to be at least 6ft tall.

Going back to the Ducati brand, back to style, sophistication and performance, one of the highlights for 2015 is the Diavel Titanium, which will be limited to 500 production units, similar to the Panigale Leggera.  It will probably be a very expensive machine, with high end materials (Titanium , of course, carbon fiber, and others) and several components and paint customized especially for this bike, including a set of forged wheels. If you like exclusivity, that’s the way to go.

2015 Limited Production Diavel Titanium – Only 500 units will be commercialized

Another highlight is the 1299 Panigale, coming in three versions: The Panigale 1299 , the Panigale S and the Panigale R, all of course, with the superquadro engine.  The 1299 models have a 100cc increase in displacement from the previous model and are now reaching more 205hp at 10,500rpm. This is quite the machine, with a whole host of eletronic riding aids, including Öhlins suspension with electronic compression and rebound damping adjustment with semi-active mode.

The Panigale R is a different animal. This is actually a 1198, although still at 205hp.  The idea baout this bike is to be within the Superbike’s EVO rules which has pushed for the return of the homologation special, the very small production line of very specialized motorcycles at very high prices. The Panigale R is Ducati’s homologation motorcycle.

The final product presented was the 2015 Multistrada.  Claudio presented the new Multistrada under Ducati’s belief in accurate design and technological innovation. Despite the strong similarity with the 2010-12 and the 2013-14 models, the 2015 is a completely new motorcycle. And it’s key difference starts with a small part, the camshaft phaser, which is at the heart of the new motor, the Desmodromic Variable Timing (DVT) motor. Ducati’s DVT is a first on a motorcycle to have variable timing on both the intake and exhaust valves.

There are many other updates to this new Multistrada.  We already presented the new motor in detail, as well as some of the anticipated changes to this new model. We will discuss the new specs in more detail on an upcoming post. The list is rather long, this bike deserves a post on its own.

Overall, we wanted to give you a summary on Ducati’s marketing through its way of communicating with its customers on this world premiere.  It was well delivered and at high standards of professionalism, but it always felt very personal, like he was talking directly to each one of us. Nothing like having the CEO of the company be the guy leading the conversation, delivering the products, and as a result demonstrating his engagement with the company’s business and its products, the customers, and his team of staff. The overall impression is that of commitment to the company’s values, renewed efforts on technological improvements, and continued growth. 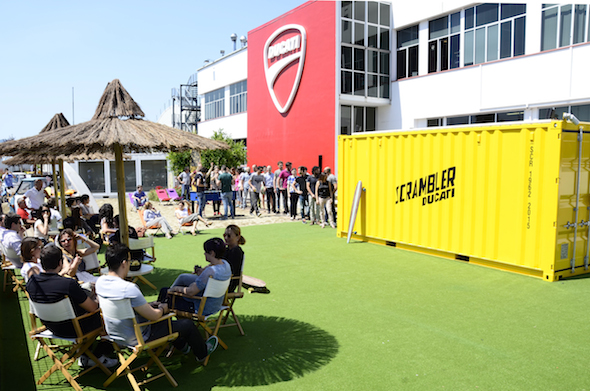 Ducati and Scrabler Ducati logos red and yellow side by side.

The branching off of Ducati via the Scrambler Ducati is an ambitious project, and the results no doubt will come. There will be a lot of yellow on your local Ducati dealer coming up this spring with a new family of products that will take the Ducati brand, in its Scrambler guise, to people who have not had a Ducati before, and people to whom the Scrambler will be their first bike.

Well done Ducati, well done Claudio Domenicali.  That was a great format to deliver new products and it highlights a company who is proud of its line of products and is committed to a growing set of loyal customers they know well, the Ducatisti.  And now be ready, they will also Scramble you.