A Quasi-Adventure with the Streetfighter 848

Adventure has been defined as “an undertaking usually involving danger and unknown risks”and it is commonly said that an adventure starts when things don’t go according to plan. Which includes situations when you purposefully deviate from your well designed, but possibly boring plan.  And this is how this quasi-adventure started. And I’m adding the “quasi” qualifier to the adventure so that I don’t raise your expectations too much about the story I will tell. But if you add some imagination to the mix, you will be able to see how this ride could have been turned into an full blown adventure.

The hooligan machine getting ready for another a ride. July 8th, 2012

July 8th 2012 was another beautiful and sunny Sunday in Oregon’s summer and like in Steve McQueen’s “On Any Sunday” it is time to go for a ride.  Of course, the hooligan sexy machine steps up to plate. Do I still have other bikes? Forlorn is the word that describes those poor beasts left behind in the garage.  They will have their time under the sun this summer, I promise. How long can a honeymoon last, right?

For this Sunday’s ride, the plan was to go to Winchester Bay and check an Oyster farm. Just because it is there for one thing, and for another because I know of people who will specifically drive from Eugene all they way to Reedsport just to get these oysters. Let’s check and see what that is all about.

Leaving home the mapped route was clear and simple: From Eugene I would take the southern route to the Ocean which is Hwy 38 to Reedsport and from there a couple of miles south on 101 to Winchester Bay. Then travel north on 101 and come back to the valley via Hwy 36 completing another variation of my pacific loop. Or take Hwy 34 in case I still have some left over dose of riding ambition at that point.

I left early, just before 9:00am and fueled the bike at the same gas station as always where the gas attendant is a cute Asian girl who gives me special attention (or so I want to believe).  From there I went south and soon I was on Lorraine highway.  I really like this part of the road, where it goes in this small meadow/valley and the road has a perfect surface, a nice ribbon of pavement, long sweeping curves, perfect for that flying-close-to-the-ground experience.

All along, on the back of my mind I’m riding and thinking about how plain this route is. Hwy 38 can be boring, right? I kept thinking about that maiden voyage with the Triumph when on this same route, almost exactly one year ago, I veered off Hwy 38 and had a nice time at the Smith River road with my brand new Tiger. On that ride I had found my way to Reedsport without ever going back to Hwy 38.

The little devil on my left shoulder (or is it the right shoulder?) was making what appeared to be some convincing arguments about the alternate route. This view (photo above) was one of them.  Eventually I got to Hwy 38 and soon after I stopped to photograph these flowers.

Who said I don’t stop to smell the flowers?

Continuing on 38, the traffic and that road’s highway feeling were not too helpful for my internal debates and soon I found myself at the turning point to Smith River road. Should I take it? No, this is not the bike for this road. And I don’t have the Spot with me, and nothing to fix a flat tire should this happen, and… but… why not? Well, the little red guy with the pitch fork won the debate and soon I was on Smith River rd. Quickly it becomes a single lane road as you climb to the summit and enjoy the nice views to the east. 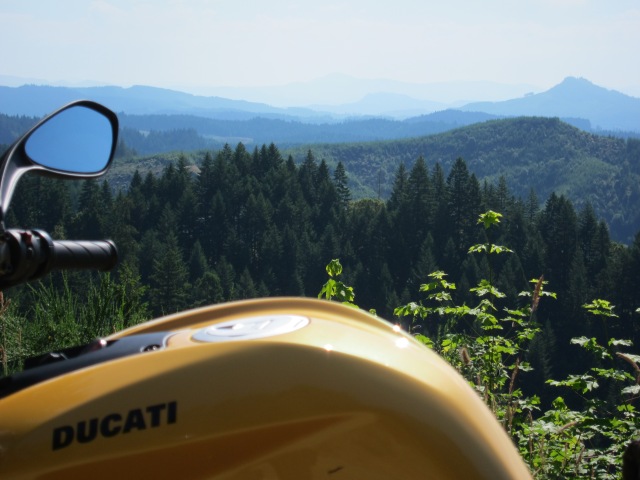 I knew this bike was not the ideal bike for a single lane road with lots of blind corners.  You quickly realize how much of an elephant in the china store it is. I was down to first and second gears.  But it was a very enjoyable experience.

Somewhere over there is the Cascades. Smith River Road, July 8th, 2012

This road sees little traffic, road maintenance is not a priority for these parts, and the vegetation is overgrown.

What it looks like from ground zero. Smith River rd? July 8th, 2012

The views were great, the road was in reasonable good state, despite the lack of maintenance. I went through a few intersections with other roads and continued on the one where it made the most sense to me. But I think I made a wrong turn at some point when I realized I was not following the same road as the one last year when I rode the Tiger in this area. One of the off-shoots of the road took me to this two-track road.  I love two-tracks. When I’m riding the Yamaha. 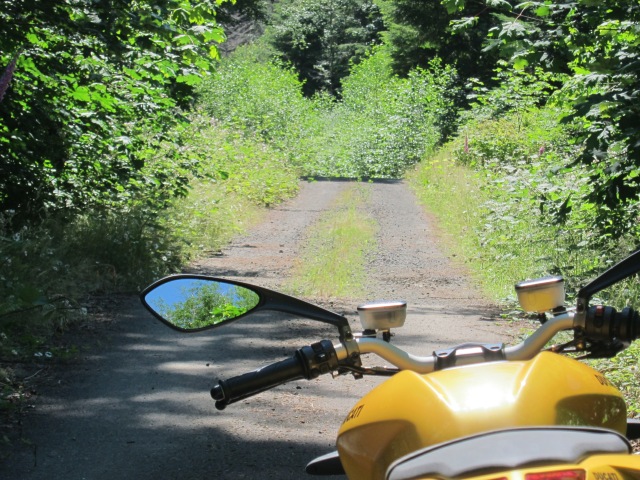 I got back on the road I was riding, and continued. At some point, in the frequent mix of sun and tree shade when your eye sight takes a fraction of time to adjust between bright light and dark, I missed a gigantic pothole.  I saw it at the last moment and barely had time to give good gas to lift the front, I braced myself for the impact, and rode straight through it. Thankfully it was not too deep and the bike actually went through it rather well. But I immediately remembered signing my initials on the contract declining an offer for wheel replacement insurance. Yes, I was not riding a spokes wheel bike here and this bike has suspension not designed for this type of roads.  But it was going surprisingly well. But on the back of my mind I was thinking how long would it take for me to walk 10 or so miles on this road until I would find someone who would be able to help me should something happen and the bike became inoperable.  I had plenty of water. No food. I slowed down.

I did not try the smart phone for a chance of finding my location on a map. I have AT&T as a provider and I know its connection sucks at a mere couple of miles out of towns.  If there is one thing I hate doing when exploring is turning around. I’ve done it in the past, but usually my modus operandi are to just keep going. So I kept going. At times the road would get better, with signs of more traffic and I would feel good and then it would revert to a narrow overgrown path and I would start wondering about my whereabouts again.  Eventually I came across a confluence of roads with location signs. Now all is good. I had not been to Drain, but I had come from Hwy 38 from that general area, about 37 miles ago, I concluded.  Therefore I should follow the direction that indicated 13 miles to Hwy 38 and complete the detour of Hwy 38, probably different than what I did last year, where I arrived almost directly in Reedsport. 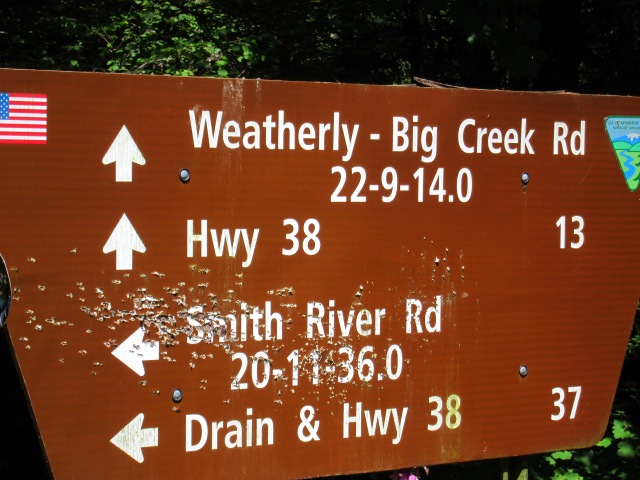 A sign somewhere on the Oregon Coast range. July 8th, 2012

At this point the bike had exactly 1313 miles on the clock. And I had 13 miles of road before hitting Hwy 38. An omen? Good luck or bad luck?

Anyway, I made that easy calculation and if I did not hit Hwy 38 at 1326 miles I would had missed a turn at some point. Eventually the road opened into a clearing and it was really nice for a while. 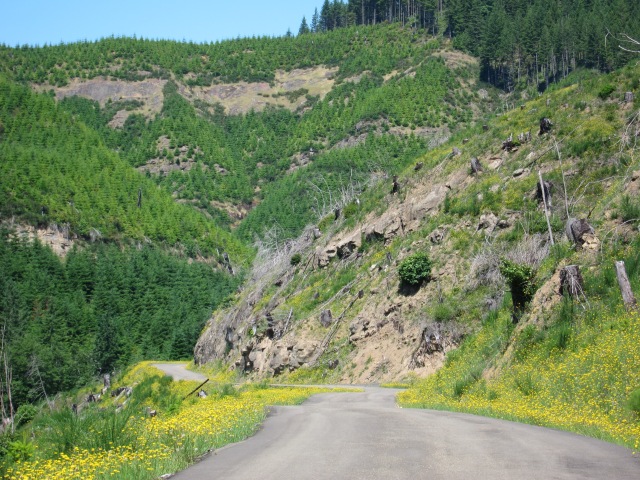 The bike was feeling at home with all that yellow. 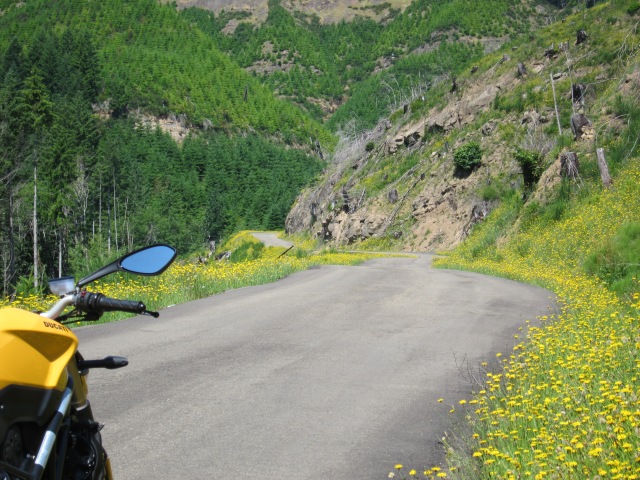 But I had a feeling these flowers, who live here permanently and witness the little traffic that goes by, that the conservative among them were saying: what the hell is this bike doing here? The adventurous among them were happy and excited to see a different type of bike going by. I bet with a good level of confidence that they’ve never seen a Streetfighter before. So I carry on and soon after this stop I come across a fork on the road. Following the straight ahead direction of travel shoes a lot less signs of traffic and making a 90 degrees left turn seems to be where most traffic followed. And left is where I know Hwy 38 should be. I did not stop, I simply took the left turn and climbed a deforested area.  There was a sign stating the trees in this area were reforested in 2008.  Down to the right on the photo below is the portion of road with the yellow flowers documented on the photo above.  If you follow that road you get to some trees that were not cut and right there you can see it continuing straight up and the road to the left which turns around and gos on the side of the hill to the left and circles to where I took this picture.

I made a mental note on the mileage. I had traveled 6 miles of the 13 miles. So I figured I still had plenty of gasoline to come back and try the other road in case I hit the 1,326 miles on the odometer and don’t find Hwy 38.  In fact, I had enough gasoline to trace my steps back all the way to Hwy 38 where the adventure started. I just didn’t want to go back to that middle of nowhere at this point.

Well, this story is getting to be too long, right? Lets add some suspense as well. On the next installment, Winchester Bay, the Oyster farm, and how I made it out of the Oregon Coast range maze.

Thanks for reading!
Advertisement

This entry was posted in Riding the Ducati and tagged coast range, Ducati, motorcycles, oregon. Bookmark the permalink.

12 Responses to A Quasi-Adventure with the Streetfighter 848