American Samoa: What makes it beautiful

I like adventure books, and I’ve read several adventure books about sailing, from people who navigated the world on sail boats with their families, to Shakleton’s voyage of endurance to Antarctica, to the people who went on solo circumnavigation of the world on simple sail boats or on high technology sail boats with all sorts of equipment powered by solar and wind charged batteries.  They are all heroes to me. I once had a sail boat myself, with a couple of friends, but they did not share my concept of long trips, the boat was mostly for short runs up and down a very small portion of the Columbia river. They were happy with that. I wanted the adventure, as described in one of my early posts titled “I’d rather be sailing?” on this blog.

But my point in bringing this up on this post about American Samoa is that the Polynesians are a very special chapter on the virtual book of sailing history. They found their way to practically all the islands on a large portion of the South Pacific. About their sailing technique, some people claim they were actually drifters, arriving at these islands as passengers of the currents and wind directions. Others claim they were skilled navigators, mastering boat building and star and wind navigation, and interpreting current, waves and bird travel as navigational instruments.

I prefer to believe on the latter approach. But irrespective of which way was the correct one, they made it!  And they made it in a way that allowed them to successfully inhabit these islands. That is, they had to have some level of planning involved in this process and it worked. And also, they had the courage and drive to embark on such journeys that allowed them to travel on such a vast territory. For more on the very interesting history of the Polynesian peoples, check this entry on Polynesian Culture in Wikipedia. Wiki, by the way, is short for the Polynesian (Hawaiian) word wikiwiki, which means quick.

My point with the sailing story is that I greatly admire them for their hospitality, their kindness, their courage, but of course, primarily I admire their ancestors’ seafaring skills. Those skills have been transmitted orally from generation to generation. 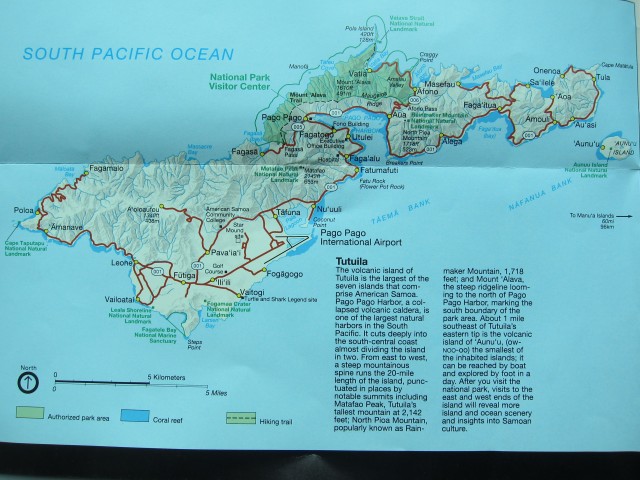 The Island of Tutuila. American Samoa

American Samoa is formed by two sets of Islands. The Tutuila and the Manu’a Islands. In Tutuila is where most of the population lives. 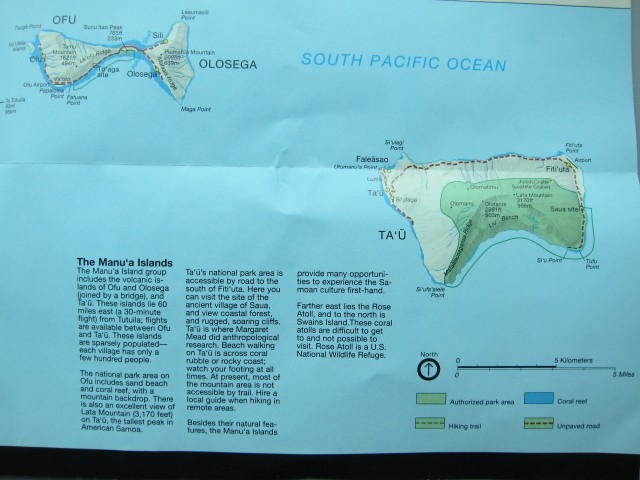 Each time I go to Samoa I learn some more about their culture. I’m always disappointed to see so many Christian churches, a reminder of western colonization.  In general the church buildings are in better shape, with fresh paint and all, than the Samoan residents’ houses or public buildings. Something not so uncommon around the world.

One of the many Christian churches in American Samoa. May 2008

On my previous post about American Samoa (American Samoa, Places to Stay) I started it by showing the Hawaiian airlines Boeing 767 parked on the tarmac with the tall stairs attached to it. On this last trip I discovered the stairs have received some improvements. Now it is covered with an acrylic roof.

Two flights a week from Honolulu to Samoa (Hawaiian Airlines). American Samoa, May 2012

To fly from Honolulu to Pago Pago, American Samoa, it must be a lonely chunk of air space from the pilots’ perspective. That’s the feeling I get when boarding this flight, knowing we will be flying more than 2,000 miles with very few alternate airports on the way. Imagine how lonely it was when the Polynesians were sailing these waters a couple of thousand of years ago. And on the photo below, this is what the runway looks like. It is somewhat short, it is on a downhill, and it ends on the drink. 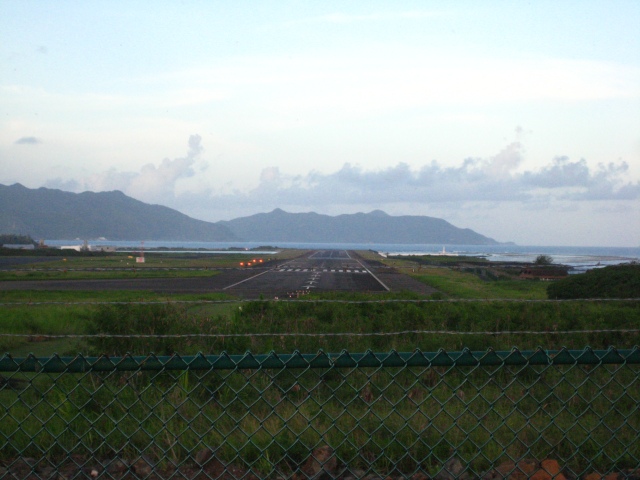 The plane usually lands coming from the position where I took this picture, going in the direction of the water, so it flies really low, over houses on approach (that are behind me from where I took this photo). The pilots have to make sure the plane touches ground on the beginning of the runway. By the way, on this last trip I found out they have built a better fence around this runway.

The runway at the Pago Pago airport, American Samoa, November 2011

The Tutuila Island, the main Island of American Samoa, is narrow and tall, about 20 miles long, on a band of less than 5 miles wide, and with very mountainous geography.  The airport area is basically the only somewhat flat area on this group of islands. 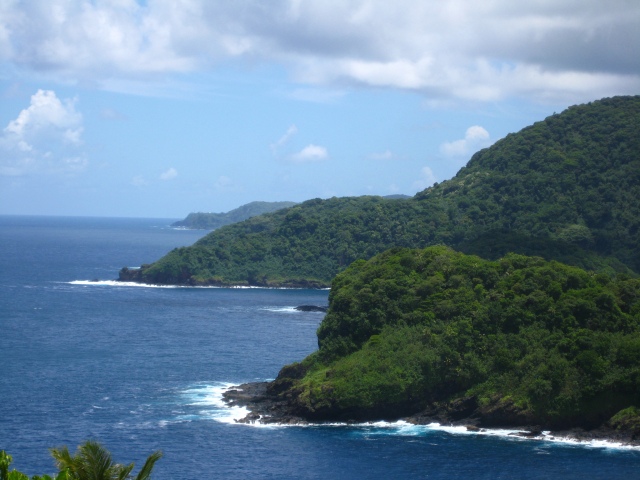 I hope to be back in Samoa and get to see more of these beautiful islands. Meanwhile, here are some photos of American Samoa from this last trip and from previous trips I made to Tutuila.

View from Le Falepule. January 2008 was my first time in Samoa.

Most everything arrive via container. Pago Pago harbor, May 2008

Typical bus for public transportation. May, 2008 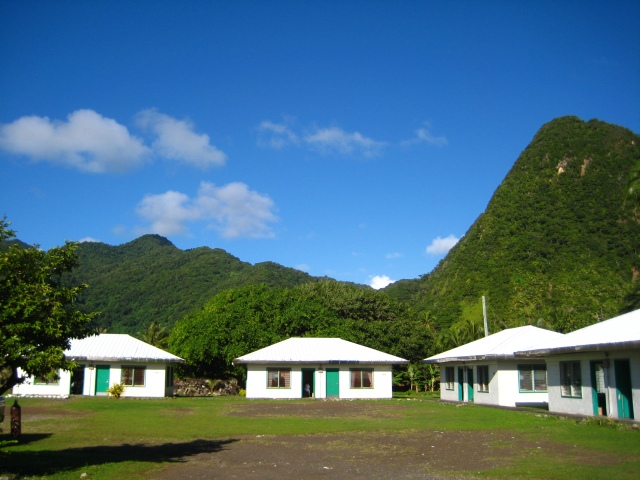 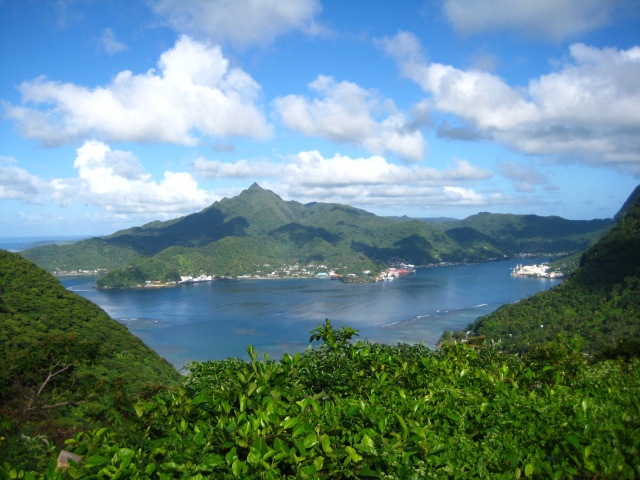 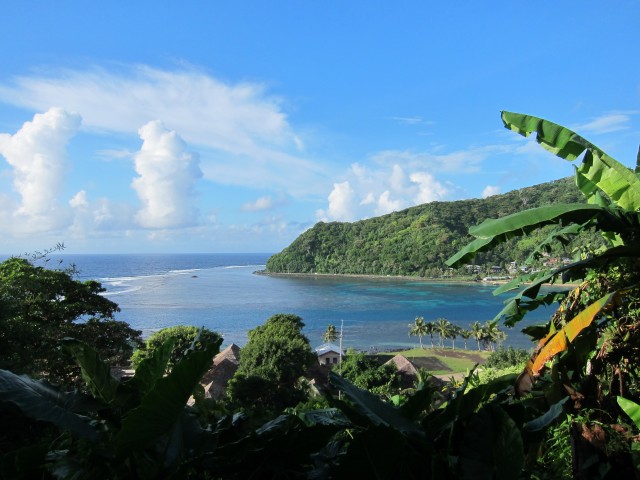 The buildings below are where I work, when in Samoa. May 2012

I have many other pictures of beautiful locations in American Samoa. I will reserve some for other posts. Eventually I will put together a post about American Samoa food. And one other that shows some of the damage from the 2009 Tsunami. And as I mentioned before, I hope to one day be back in Samoa.

3 Responses to American Samoa: What makes it beautiful