The Buena Vista Ferry and the City of Astoria, Oregon

The Buena Vista Ferry and the city of Astoria have nothing in common with each other.  They are not close to each other there is no common road connecting the two of them. One is a Ferry, the other a city. Except that they are both in Oregon.  The other thing in common is that I planned a ride where I would be on both locations on the same day.

Another beautiful day, another opportunity for a ride. August 21, 2011

Remember that I wanted to ride from Astoria to Gold Beach as my original plan to start exploring paved roads on this new bike? Well, I went to San Francisco instead. I still wanted to check Astoria and ride south on Hwy 101 from there.  And I also wanted to go back to the Buena Vista ferry boat, something that I happened to learn of its existence by accident on my way back from Mt Hood two weeks ago.  So there you go: a motive for a ride. I started by going north towards the Buena Vista Ferry Boat.

Soon I was at the ferry.  It departed just before you arrived at the boarding area? No problems, if you are there it will come get you and it will take you across right away even if you are the only passenger.

Check this tower you see to the left on the above picture, the cables that go across the river, and these connectors you see on this picture below (viewed from the boat).  The ferry operates on an electric motor.

It is a quick cross. Cheap thrill as well, $2.00 for the motorcycle.

My turn to go.

Having completed the first mission for this ride, I got my attention towards Astoria.  There is no direct route between the Ferry Boat location and Astoria.  So I took several roads I’ve never been to before to get there, crisscrossing the state towards the northwest of the state. I went through Independence, OR.

Then I went past Carlton, OR.

This is the northern portion of the Willamette Valley, many wineries are located here, and these towns have a few wine tasting rooms.

From here I got on Hwy 26. During the summer these main roads have too much traffic. A few miles of that traffic and I was ready to find the smaller back roads.  I got 103 towards 202, free of traffic.  I’m glad people don’t want to bother with these smaller roads.  Keep them for the few people who want to venture out and avoid traffic.

Almost in Astoria, I stopped for photos of this general store in Olney, OR.

Home of the “Big O Saloon”.

I arrived in Astoria and immediately crossed the bridge towards the state of Washington. I had videos of the cross but I managed to delete those files by mistake… Here is the view from the Washington side, looking east.

The Columbia River. As wide as it gets when it arrives at the ocean. August 21, 2011

And looking west, the bridge.

I crossed the bridge back to Astoria and rode towards the Astoria Column (or spiral).  Here is a Wikipedia account of the column:

“The Astoria Column was erected in 1926 at an elevation of 600 feet atop Coxcomb Hill, the location of the first permanent American Settlement west of the Rockies. It has been listed in the National Register of Historic Places since 1974, and was refurbished in 1995. This impressive Oregon Coast historical monument is the only one of its kind in the world!

The column displays 14 scenes commemorating important events in the history of Astoria in cronological order. The mural scrolls around the 125-foot-high structure in an upward spiral direction, with the earliest scene at the base of the column. An interior 164-step spiral staircase leads to the top of a viewing platform with spectacular views.” 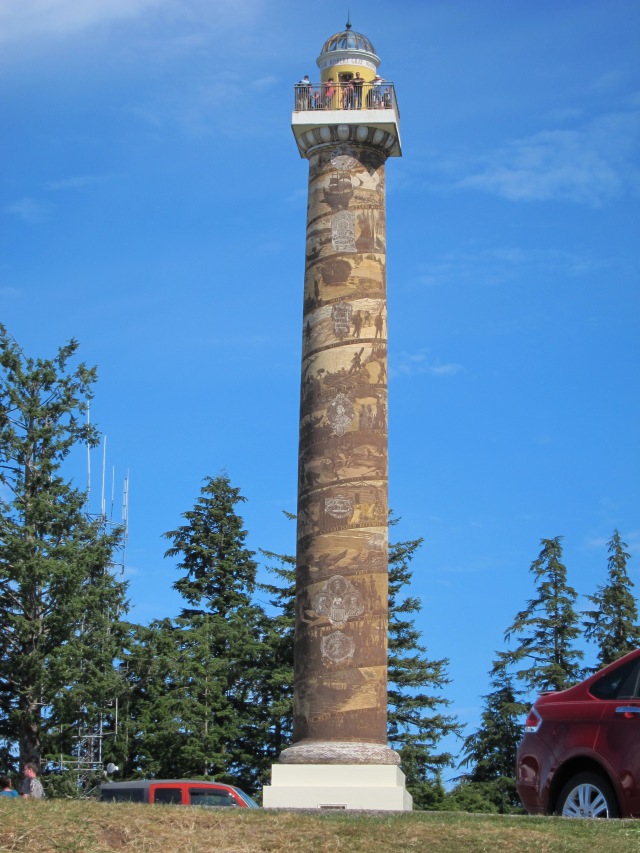 And from there you can see the bridge, like if it were a bridge to nowhere… as it disappears into the fog on the Washington side. 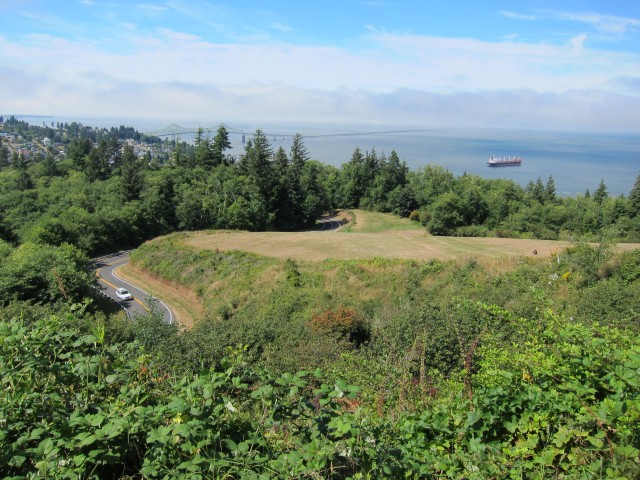 In the same area there is a monument to the Chinook tribes where this area was home. The Chinookans were masterful makers of dugout canoes.

Do you know Astoria was the setting for the film “Kindergarten Cop” with Arnold Schwarzenegger?

It was time for me to start my way home. I took Hwy 101 south, which crosses the Youngs Bay on the bridge shown below. 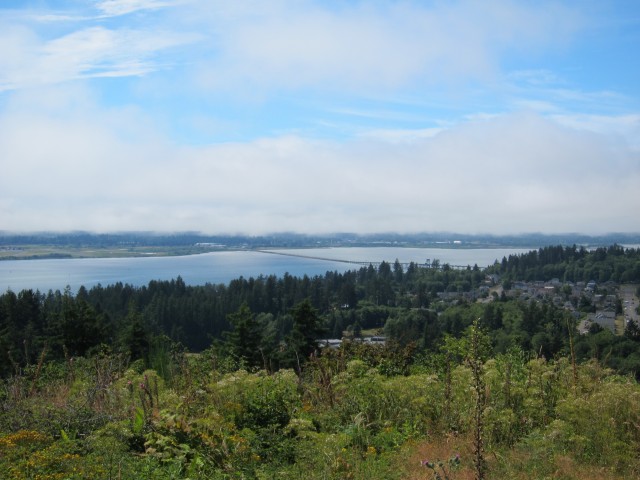 Continuing south I went through green fields, and dairy cows. I was about entering Tillamook county.  Here is Garibaldi. It is amazing to me that the name “Garibaldi”, of a French born (Nice) Italian hero, who made history in South America and Europe (mostly Brazil and Italy) carried over all the way to Oregon.  From wikipedia, Giuseppe Garibaldi (Joseph MarieGaribaldi for the French) ( (July 4, 1807 – June 2, 1882) was an Italian military and political figure. In his twenties, he joined the Carbonari Italian patriot revolutionaries, and fled Italy for South America after a failed insurrection. Garibaldi took part in the War of Farrapos, in south Brazil, and the Uruguayan Civil War leading the Italian Legion, and afterward returned to Italy as a commander in the conflicts of the Risorgimento. There is a town called Garibaldi in South Brazil.

The next large area going south on 101 is Tillamook, where you can find an Air Museum.  That seems to be a good place to come visit in the winter. They have a good collection of WWII planes. 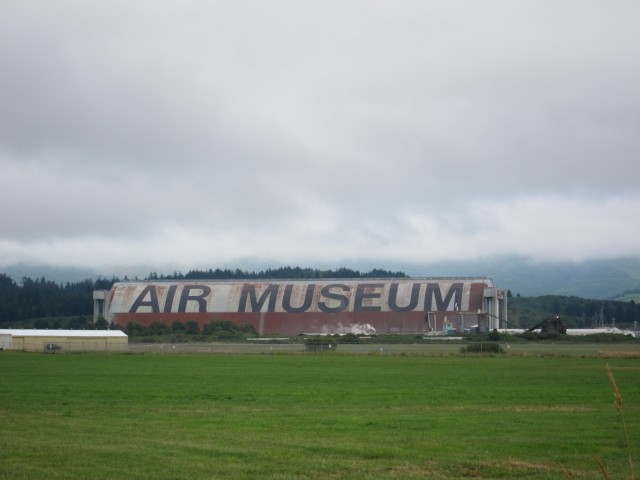 Just north of Lincoln City, I stopped for this picture.  Nothing special about it, except the stories you can read or imagine from all the combined items included in the photo. Hwy 101 is going through that bridge on the left on the background.

South of Lincoln City, a view of marsh lands.  This view could had been taken from Juneau, Alaska.

A last view of coastal landscapes before arriving in Newport.

Once I got to Portland I took Hwy 20 east and as it usually happens, on the other side of the coastal range I re-encountered the sun. Many farms in the Willamette valley (perhaps in other places as well) use old farm implements as decoration items.

Farmers are busy working their land.

Cow feed ready for the winter.

Sheep farm in the valley.

This was a long day. Tired and ready to get home, I could not avoid stopping for pictures at the magical hour, when the sun colors the landscape in nice golden tones. Eventually I made it home!

This was the longest day-ride with this bike. 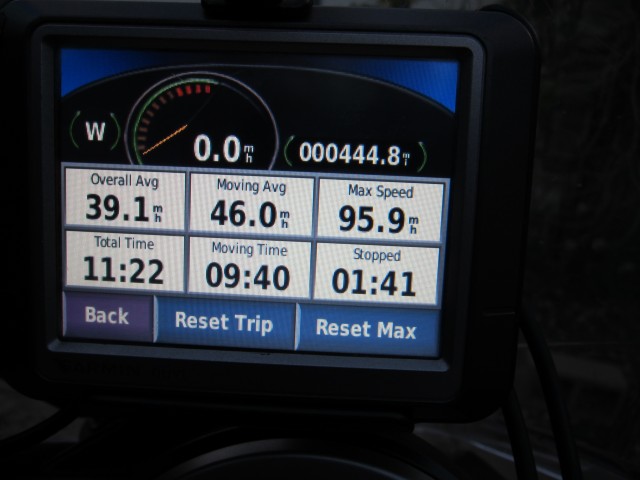 Not only was this the longest day-ride with this bike, but with this ride on the northern portion of Hwy 101 I completed the entire length of this road on the Oregon coast.  There is, though, still plenty of details to discover on this beautiful part of the world.