A Bridge not too far: The Golden Gate Bridge – Day 2

I woke up to the sound of rain. Or so I thought. The campsite was under tall pine trees that formed a canopy several feet high.

I could hear a somewhat regular tapping sound of water hitting on the tent fly.  It turned out to be the thick fog coming in, saturating the pine leaves with water and eventually dropping down. At east that is my theory, as it did not quite feel like rain.

With all this moisture, I decided to lift camp and get going.  It was Monday and I had to attend a Skype call at 4pm, and I needed internet access for this work related call. Looking at the various combinations of mileage to cover and internet access, I decided I had to push it all the way to Petaluma or San Rafael, just north of San Francisco. Plenty of Starbucks with internet access in those areas. That way, I could also enjoy the return trip from San Francisco up north with more time to spare.  I packed under the curious eyes of my campsite neighbors.  I guess they can never figure out how everything fits on a bike or something. In a few minutes I was on my way for the 8 miles south to Trinidad for breakfast.  Less than a mile outside of Patrick’s point and my helmet visor was already dry as I got away from the fog moisture.

From Trinidad’s own website, this is the gist on the town: [Trinidad is] “California’s smallest incorporated city (with a 2000 population of just 311) is noted for its spectacular coastline with ten public beaches and offshore rocks. These rocks are part of the California Coastal National Monument of which Trinidad is a Gateway City.  This natural landmark is joined by three additional marine landmarks – the historic Trinidad Head Light, the Trinidad Memorial Lighthouse, and Humboldt State University’s Fred Telonicher Marine Laboratory. Fishing operations related to Trinidad Harbor are vital to both local tourism and commercial fishery interests in the region.”

This town had a nice aura to it.  I checked the boat launch operations.  They seem to cater for the tourist or amateur fishermen.

The bay. Some people drive to the beach and launch their boats from there.

On my way down to the bay I had ridden past this restaurant. On my way up it became my destination. 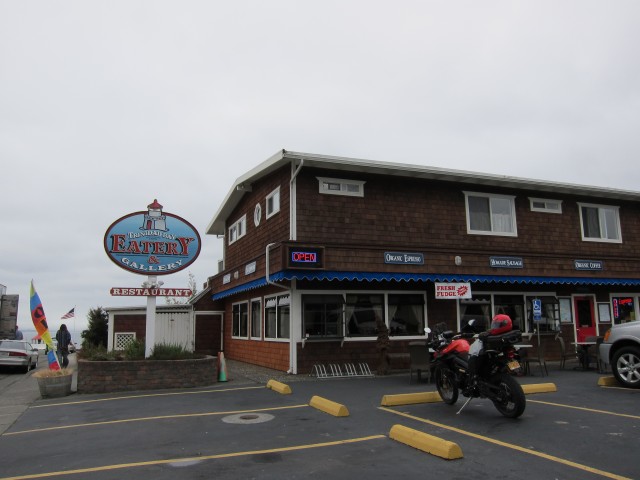 This bike is something. Two people came by to ask me about this bike. It must be something about Triumph that is more appealing than BMW or Yamaha are.  Here is the breakfast. I don’t eat this kind of food regularly.  But when riding, I know this food will be the energy that will keep me going until dinner. And it tasted great too.

By the time I finished breakfast the parking lot was full.  I arrived just in time.  I also charged cameras and phone when there.  I also got a courtesy map of the California Lost Coast that served me well on the way back north. Now my destination was Petaluma or San Rafael via Hwy 101. But first last check the Avenue of the Giants.

Just north of the junction to the Avenue of the Giants. California, July 25th, 2011

It didn’t take long and I reached the Avenue of the Giants.  Yes, big freaking trees they are. 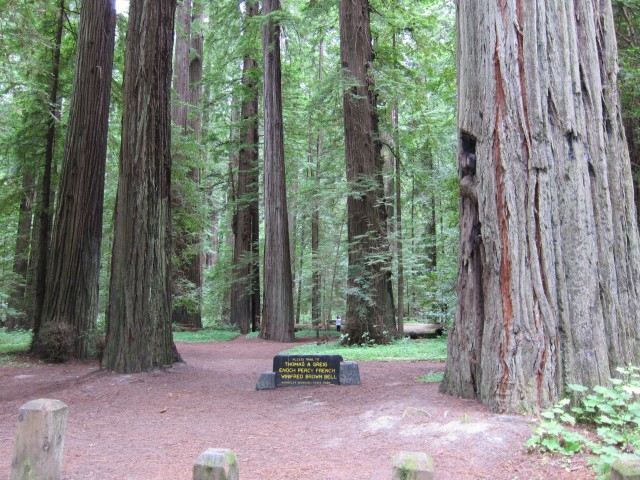 See how small that bike is. 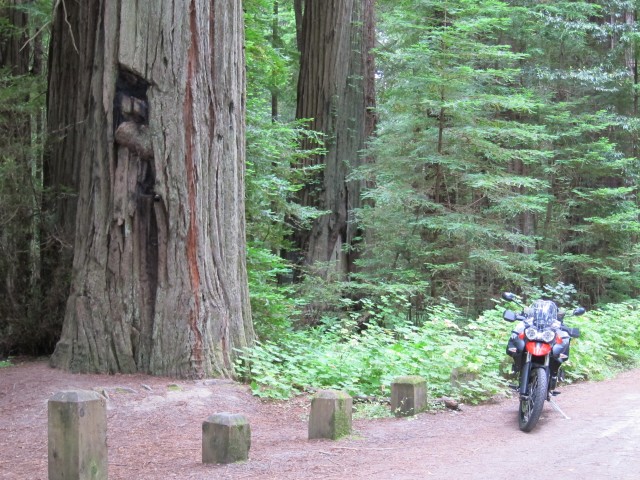 The road meanders between these little trees. 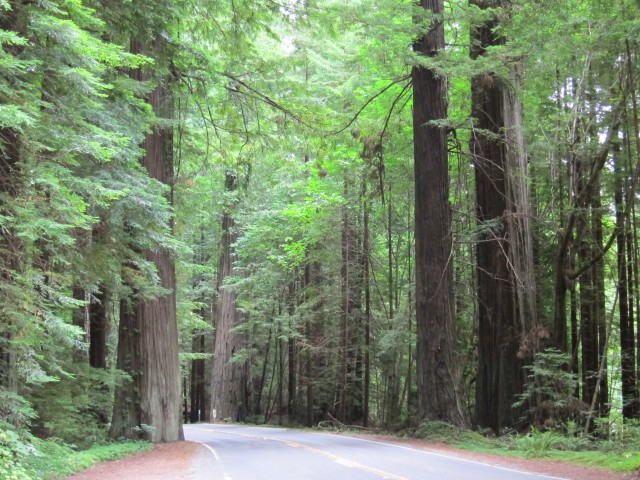 It reminds me of the Return of the Jedi! Have you seen that movie? Well, here is the Tiger at a much slower speed than those flying contraptions of the Star Wars movie.  Although the Tiger almost sounds like those machines.

And no, it was not your imagination, you really saw a really old car crossing by me on the road. They were traveling in great style, just perfect to enjoy this beautiful forest.

I was having too much fun.  At one point on one of the small towns in the forest there was this tree that you can drive through it.  They wanted some $4 dollars to let me go through it. Well… next time buddy. I got going, time was running short and I needed to be somewhere with enough civilization for internet access. I only stopped for gasoline and a couple of pictures.  I went through the middle of California’s wine country.  You know, Oregon does not stay too far behind in terms of wineries and great wine. But California wineries have their appeal.  Like this one.

Yes, it is a Francis Ford Coppola winery.

I did not have time to spare, so I kept going south.  I was now very close to Petaluma. Soon Traffic built up and slowed me down to a crawl. Petaluma became my destination. I used the GPS to locate a Starbucks and the GPS took me to downtown Petaluma and to a Starbucks with shaded parking with 15 minutes to spare for my call.

I got inside the Starbucks, got me a cold drink, and connected my phone to their internet and soon I was Skyping to a work call. No one bothered the smelly biker on the corner. And I could check my bike from there. Perfect. When the call was over, I even took notes during the call, I used the GPS and the I-phone to find me a hotel for the night. I was able to find one down the street and even was able to read the reviews on Travel Advisory.  How was it to travel without all of this? The romantics or traditionalists perhaps, say the adventure has been thrown out the door. Sometimes I agree with them. Sometimes I don’t. Sometimes I use the technology. Sometimes I don’t. My choice for the hotel was one where I could walk to restaurants. 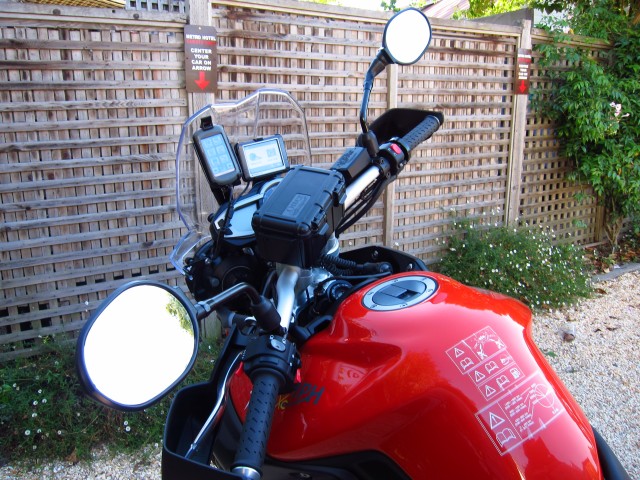 My choice was the Metro Hotel.  One of the reviewers indicated that her mother had been accused of stealing a painting from the room and been charged for that on their card.  I was a bit paranoid that they would charge me for something like that as well.  All other reviews were positive. And several reviewers mentioned the hotel was at walking distance from several nice restaurants.

Those airstream trailers were also part of the hotel. At least the rooms were clean, even they were too clean for me. The hotel staff were as short with words as they could manage and still get me a room. That’s OK with me.  I showered and went for a walk to find the restaurants. Well. It was Monday, so practically all restaurants in the area were closed. Bummer. But I had my only pair of civilian pants, and my Sidi boots are actually very  comfortable for walking, so there I went to find restaurants closer to town.

I saw some restaurants that could be an option for dinner. Then I came  to this area of town.  I’m not into “malls” as an option for good dining, but you never know. Let’s check the options. 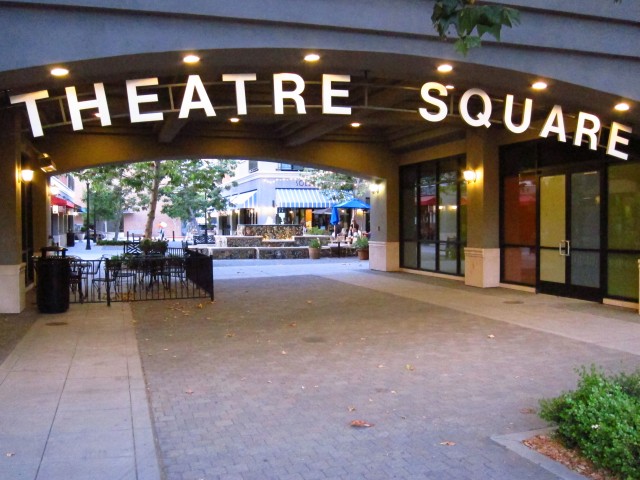 And I came across this Mexican restaurant. Why not? It is usually a safe bet, and I usually do not expect much from such restaurants. 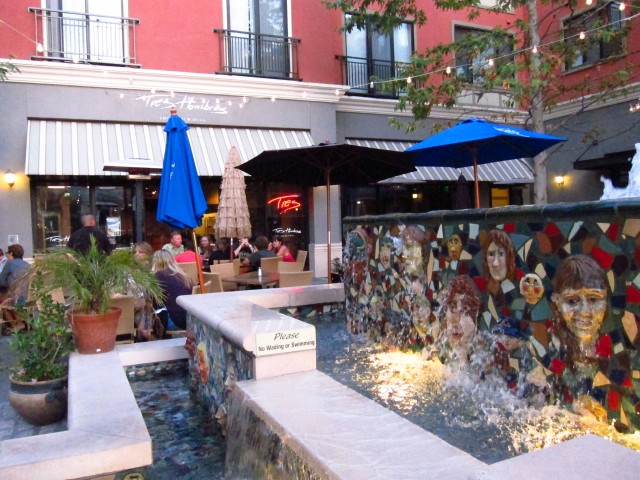 Nice to be sitting outside, enjoying the summer. Something is wrong with this picture. 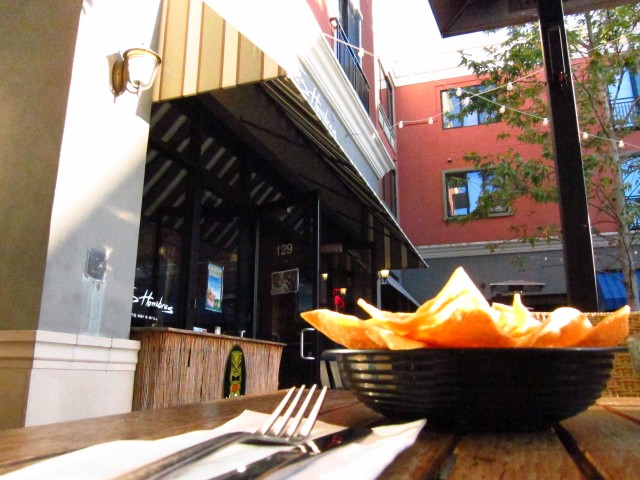 Nice and relaxing place. Although in the middle of the city, I managed to seat at a nice place to get a view of an urban sun set.

And dinner was exceptionally good. Surprisingly good. After all, it was more than a Mexican restaurant. I lucked out! 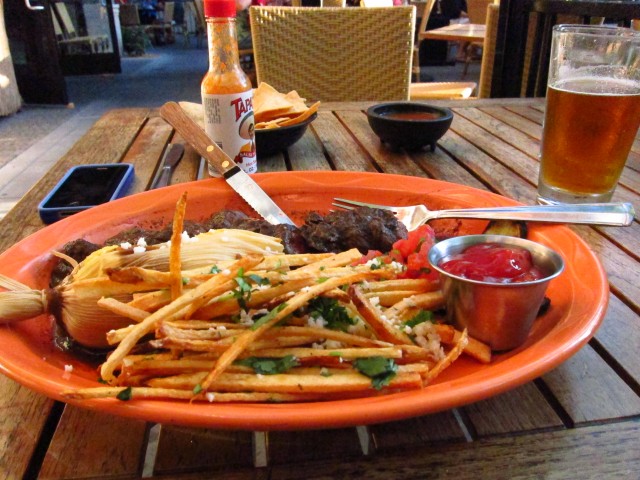 The Argentinean style stake, together with a chimichurri native Mexican sauce, and Tamales plus the french fries. What a nice combination.

That's what it was, as described in the menu. Tres Hombres restaurant. Petaluma, CA. July 25th, 2011

Satisfied with my dinner choice, I walked back to the hotel. Stats for the day:

Tomorrow I will be crossing the Golden Gate Bridge, turn around, crossing it again and start my way back north. It took me two days to get to San Francisco area, and I would have three relaxing days to ride north. It will be fun!

Next: The GGB, and back north