This post is well past its time, but I just don’t feel I can start posting this year’s rides before properly completing the 2013 riding season. And especially because this last proper ride of 2013 became a relevant one for me when in December I received worrying news from one of my riding friends.  I will explain.

Travel and weather ended the 2013 season almost abruptly to me. In some winters I never actually stopped riding. But on others the combination of when I’m here and available to ride and when the weather is good have not matched, which was the case of 2013.  Isn’t that always the case that we know winter will be here, but we never know when will our last ride of the season be? And doesn’t this actually apply to everything in life?

The European Motorcycles of Western Oregon organizes yearly motorcycle rallies.  These are well organized events called “Oregon Discovery Rally”. Every year they scout an area and camp site on varied locations across the state and provide breakfast and dinner for participants for 3 days. Meals are pretty good actually! Usually the “headquarters” location is selected so that it offers a good variety of riding terrain and geographic features around it. As is typical, from these headquarters riders self-organize and plan daily rides in smaller groups. 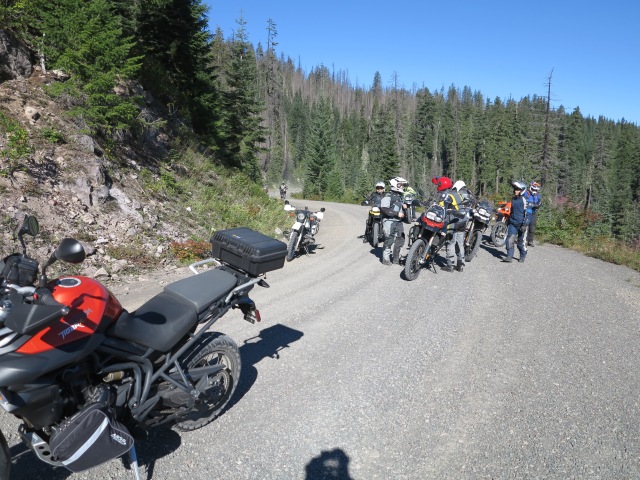 A small group ride on the 2013 Oregon Discovery Rally

At night, by the campfire, you get to hear stories about where people went, their successes, trials and tribulations, we exchange information so we all learn from each other which helps the planning of the next day’s ride.  And it is great to re-live rides, maybe some of us will tell taller stories than others.

I’m not a fan of group rides, especially when it goes on dirt roads.  I’ve described here my pet peeves on this already, mostly originating from my dislike from eating dust.  But at the same time, it was on one of these rallies, in 2008 in the Ochoco area of the state (Read that report here), that I met a group of riders who have since become, all of them, very dear friends of mine.

In 2010, not on an Oregon Discovery Rally, I met a couple from Switzerland, Oliver and Monika, who were riding through Eugene.  They were picking their bikes up from service at the European Motorcycles of Western Oregon and I happened to be there also picking my BMW Dakar up from service. That evening I had dinner with them.  Oliver and Monika became friends with Scott and Madelyn of the ECMOR and also with me, and since then they have been coming here every summer to ride their bikes and also participate in the Oregon Discovery Rally. Eventually Oliver’s brother Christian joined the fold as well. 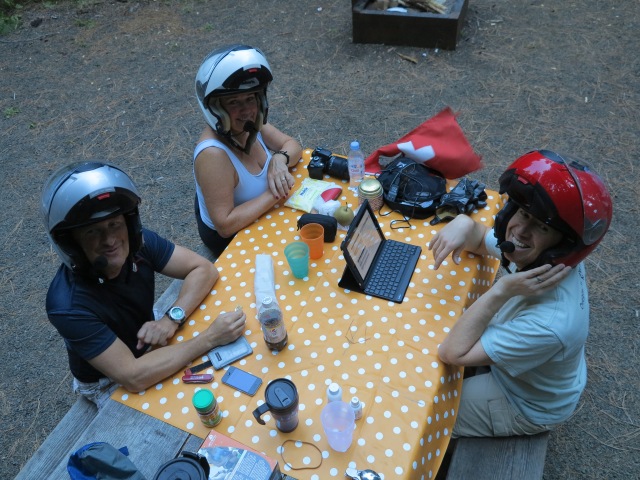 From left to right: Christian, Monika and Oliver

Knowing Oliver, Monika and Christian would be here for the 2013 Rally was an incentive for me to join the Rally. This year’s Oregon Discovery Rally was based out of the Horseshoe Bend, a handful of miles east of the Steamboat Inn, along Hwy 138, where the Umpqua River does a perfect horse shoe bend.  Knowing this was going to mostly be a paved roads rally, with some gravel roads on optional rides, I prepared my Tiger 800XC for the event. And the Tiger matches very well their BMW F800GSs and F650GS.

From my previous posts, you already know Christian had arrived earlier and rode Oliver’s bike and joined us on a trip to the Steens just the week before. When his brother arrived, Christian returned that bike and borrowed another F800GS for the rally.  I picked him up where he was staying and together we went towards the Horseshoe Bend campsite.  Oliver and Monika would be riding towards the campsite later.  We would all be arriving a day before the start of the rally, so we could help the shop crew with the setting up of the campsite kitchen.

Picking Christian up to ride together to the Rally

We stopped in Cottage Grove for lunch. 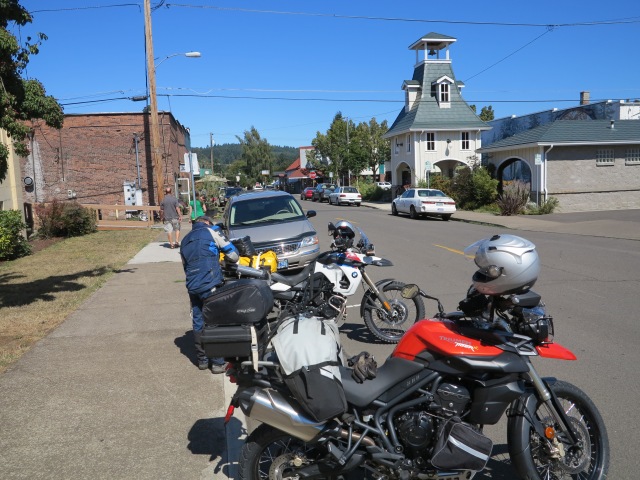 From there we went due east along the Row River and eventually took Sharps Creek road to the southeast which would spit us right about the Steamboat on 138.  We met a large group of cruiser riders on one of the passes. 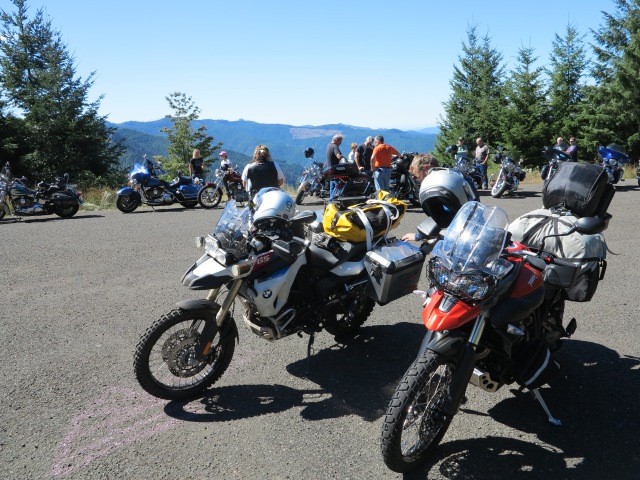 Adventure bikes and and Cruisers

This area is nice, it is the route Rod sets for us riders to attend the the Cycle Parts’ (local Triumph Shop) annual Steamboat Inn Lunch Ride. 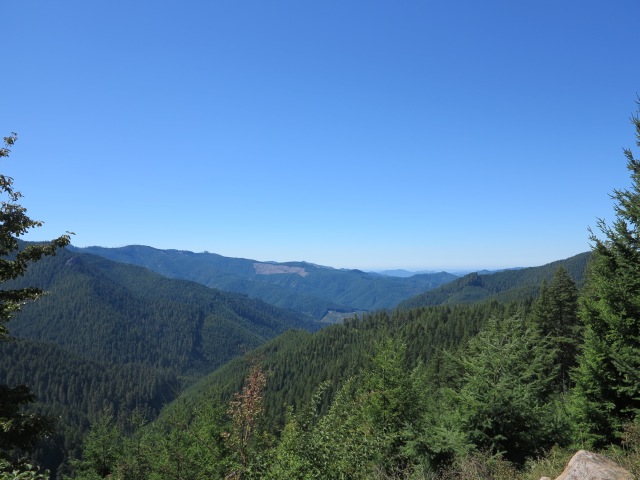 View from one of the passes on Sharps Creek Rd

We arrived on the campsite earlier than the others, prompting me for a relaxing nap before jumping into action to help set the kitchen up and set up my tent.

When the crew arrived we quickly set the camp kitchen up.  The next day we started our rides in the area, first we made a visit to Watson Falls.

Then on our way back to camp we stopped by the Toketee Falls.  This day was the only ride I led while on this trip.

From this time on, Oliver took over the role of route planning. Oliver is very organized and every evening he diligently studied maps, prepared routes and then transferred the information to his GPS.  That means from that time on I only relaxed and enjoyed the rides following him and the rest of the gang.

Oliver and Scott, planning the next day’s ride

The next day we took a dirt ride towards the general direction of the Crater Lake. 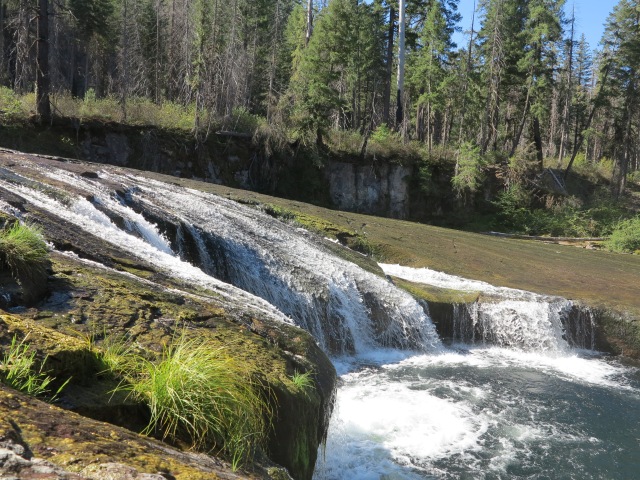 We stopped by the Natural Bridge on the Rogue River, where the entire river goes under volcanic rock for a 100 yards or so.  The photo below depicts the river when the water shows up from under the rock.

Rogue River coming out from under a natural rock bridge

The following day our group went to Crater Lake, Oliver (with the red helmet) ahead as always.

The Crater Lake is always great for photographs.

The Tiger is back at the Crater Lake

It was as if I was visiting my Uncle Benito and my friend Francis. Both passed away in 2013.  My uncle died in April, when I was on a trip to Crater Lake. Francis died in early May, and his connection to Crater Lake was because of his pride of the deep blue color of the Mediterranean by the Straight of Messina, more precisely in Mortelle where his Sicilian home was located.  The deep blue waters of the Crater Lake will always remind me of him.

We went around the Crater Lake, stopping by the various look out places.

One of the many stops around Crater Lake

Mount Thielsen on the background

Just about this time a wasp entered my helmet through the open visor and found its way between the helmet and my sun glasses and stung me. I’m allergic to most bee stings, so the reaction soon started to take place. Thankfully its venom was not too strong, I was sort of fine, despite a seriously swollen face and some discomfort.

So I continued the ride with everyone, exploring other areas surrounding the Crater Lake.

At some point I decided it was better to abort this ride and go back to camp and rest, I was afraid of further effects from the wasp sting. Scott and Kendrick decided to baby sit me on my way back to camp, following my bike closely, making sure I was not going to collapse or something. Thanks guys!  I should get my EpiPen (Epinephrine auto-injector) prescription filled.

Overall, it was a great location for the Rally. We could not cover all the different attractions in the area.  But on evenings, while exchanging information with other groups of riders, we learned of areas we had missed. There is always a next time. 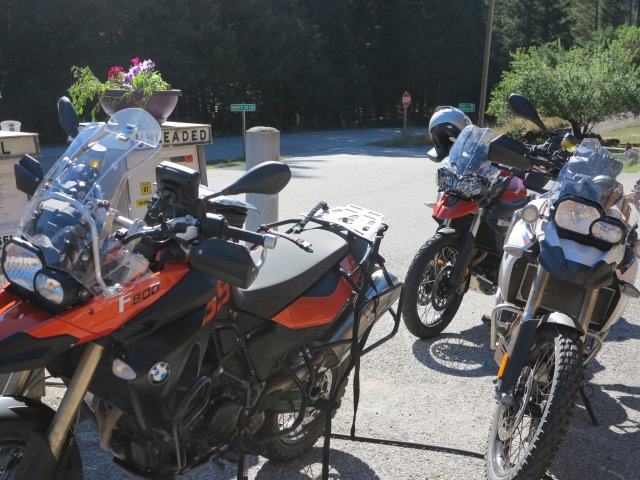 Daily Ritual: Fueling the bikes at the Dry Creek store. 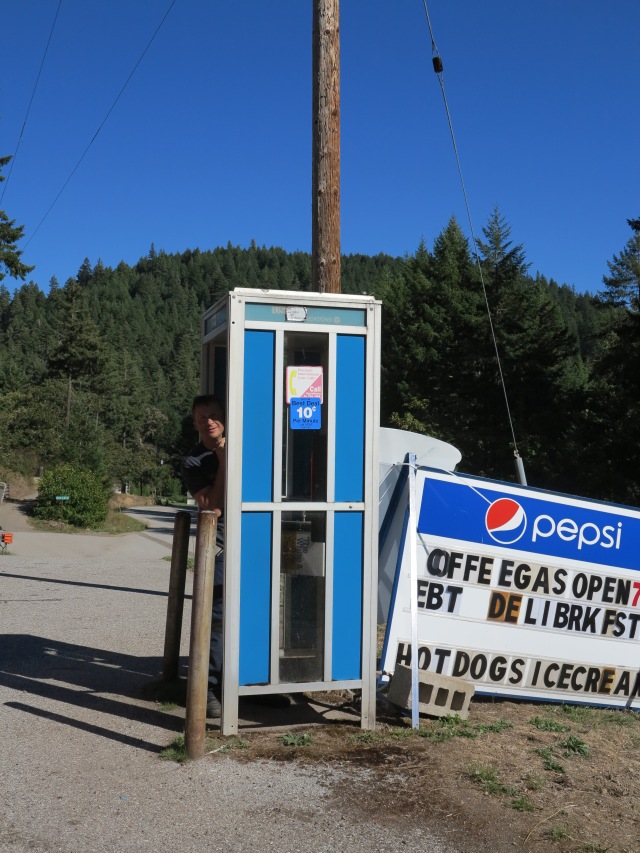 Another daily ritual: Christian trying to call his wife back in Switzerland.

Wild black berries by the road.

Very cold water, by my standards. 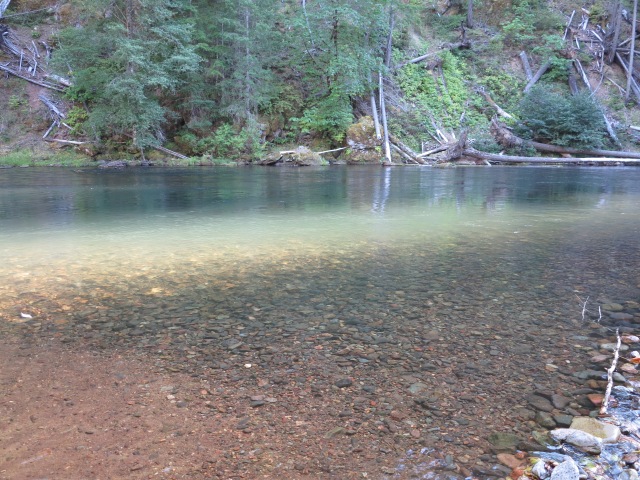 Another daily ritual: Everyday, after the ride, Oliver, Monika, Christian and I would walk down to the Umpqua for a very cold but energizing swim.

But what made this trip important, in retrospective, is that by late December I learned Oliver was diagnosed with Multiple Myeloma, something he discovered after suffering from renal problems for a little while. It is a blood cancer, generally thought to be incurable but highly treatable and remission possible.  The bad news is that he will not be riding in 2014, which made me look back at the 2013 ride and associate a more special meaning to it. The good news is that Oliver is reacting positively to the treatment.  Although he can’t travel in 2014, it looks like he will be back to ride with us in 2015. 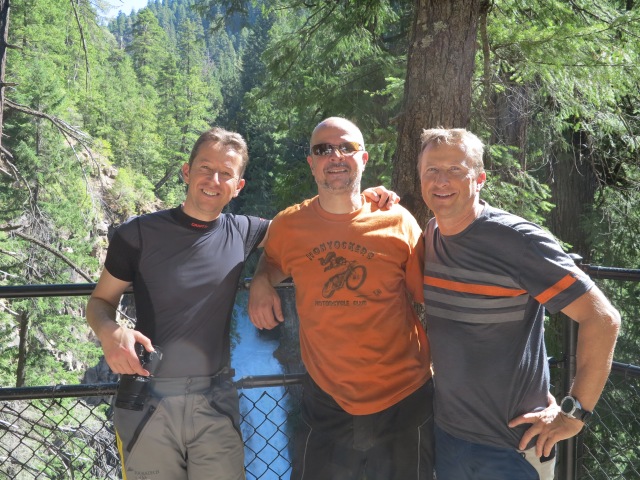 I’m considering Oliver’s situation as just a blip on the radar, as remission is not an impossible scenario to his condition, and with treatments getting better and better the prognosis becomes more and more positive, and therefore I look forward to riding with him in the future.  But it serves me as a reminder.  We will all go one day, one way or the other. Every moment counts, and to me it is the best incentive to always see the best on everyone and everything.  I’ve learned to never take anything or anyone for granted, but I’m crawling in terms of always making it happen in the moment.

To Oliver and to his full recovery!