I was invited to a cook out organized by the local Triumph dealership.  I had been thinking about riding on US101, always nice to go check the Ocean. And I had been thinking about testing my new screen and GPS set up in the Dakar.  All of these make for a great opportunity to go for a ride.  But it is Sunday, so first let’s play some soccer, then let’s go for a ride.

The evening before I packed the basic tools, tire repair kit, a cold layer of riding clothes and got the bike ready.  After soccer, time to fuel up and get on the road.  Sunday had started warm and sunny, but by the time I left, about 11:40am, the skies were gray and rain clouds were approaching.

I was not sure the Cycle Part folks would still be there by the time I was expected to arrive at the Ona Beach State Park. I was leaving almost two hours behind everyone else.  But the ride itself would already be a great accomplishment, so it would be good no matter what.  I decided to go on a counter-clock loop, going straight north to Corvallis, from there I would go West towards Newport and once there it would be just a few miles South yo get to Ona Beach.  On the way back I would continue South towards Florence and from Florence back East towards Eugene.  This loop makes a distance of exactly 200 miles (320 km).

It was a nice ride going there.  The new GPS set up worked well, the new location for the wind screen not as much. I got a good amount of buffeting. I will need to readjust it.  Meanwhile, the skies are getting darker and it starts raining, one drop here other there. Not a big deal. When I made it to the Ocean, over there it was not raining at all, yet.  I arrived at the cook out location when things were just about ending.  Most people were still there, about 20-30 riders, but some of them were getting ready to leave as I arrived. I still had a chance to get a bowl of Gumbo, really nice.  Thanks Rod! And a Hotdog to complement it.  And that was it for the party.  People started getting their gear on and leaving the area, running away from the rain.  Less than one hour after I arrived, in fact, looking at the GPS, my total stopped time for this trip was 25 minutes, which includes stopping for pictures and for gasoline. So I probably only stayed there for about 20 minutes.  Literally: a bowl of gumbo and a hotdog and I already had the gear back on and was ready to leave. As I started my way south on 101 the rain started.  First it was just a sprinkle. I still stopped for some pictures before the rain picked up some more.  The ocean is always beautiful and being close to it is always quite an experience.

Some people were enjoying the beach.  But certainly things were changing quickly.  Rain picked up some. 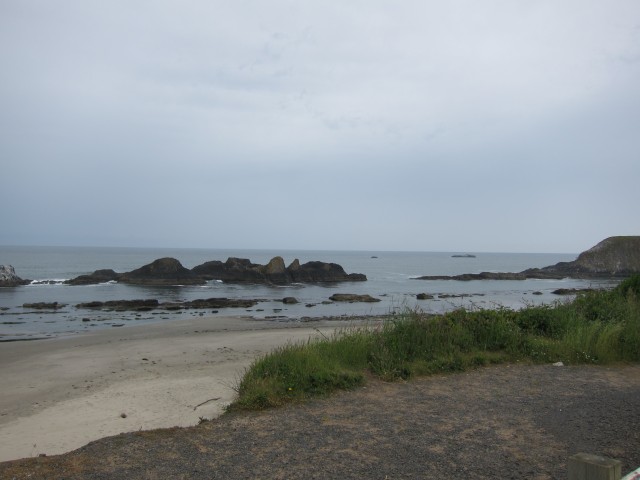 And here is the new screen and GPS set up.  The GPS units were moved from the handlebars, where reading the information required looking away from the road, to a position closer to eye level.  The wind screen is set higher up using MadStad‘s “robobrackets”.

A little bit further down the road, just south of Waldport, I stopped for this picture. 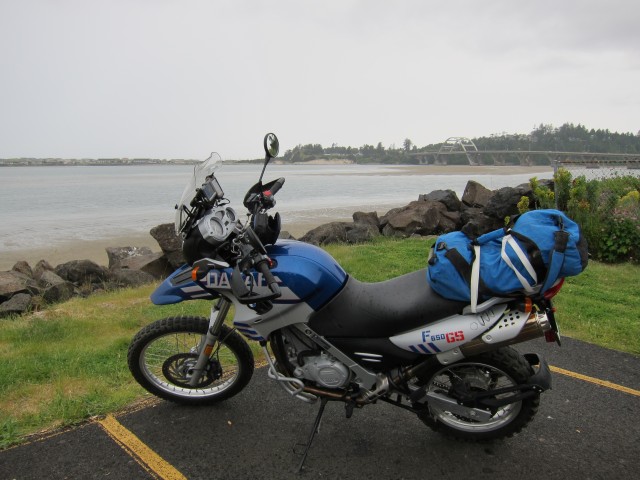 Perhaps later this summer I will do a ride to document Oregon’s bridges along US101.  Most of them built in the 1930’s are famous for their Art Deco style.  It happens that this bridge on the background is not one of the series of bridges built at that time.  More on that later this summer. 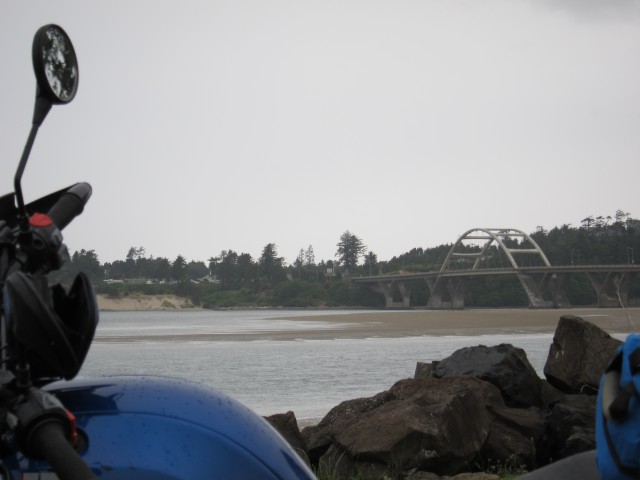 The rain was now steady as I continued south towards Florence. 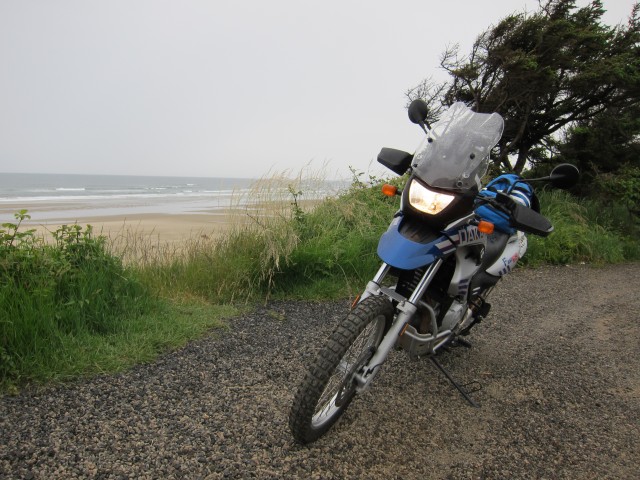 Now it was really raining… No more stops until I got home. 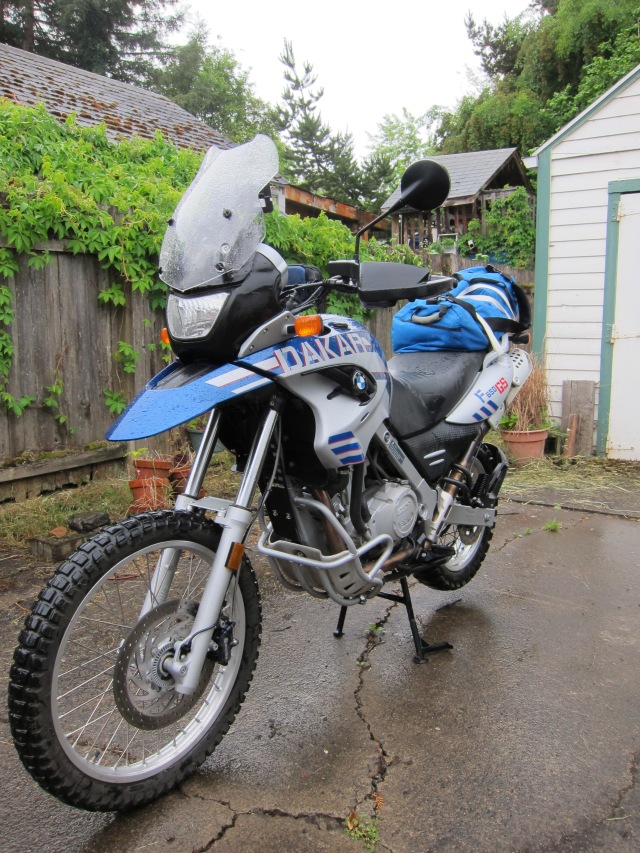 I’ve been using in my motorcycle that Nuvi 260 ( a car GPS, non-water proof) for about 3 years now. It has survived several rain falls.  Today it was two hours of rain… and it is still kicking.

You may be wondering why in the world someone needs two GPS’s… the answer is, well, because I like it.  Well, there is some convenience to it. If one fails, the other will be a back up.  The Oregon 450 is great for setting up routes with many way points.  And it records your tracks.  The Nuvi 260 is easy to maneuver the points of interest and other navigation such as to gas stations, hotels, food, etc. Therefore, no, I do not need two GPS’s.  I just like it that way.

Mission accomplished.  Average speed 50 mph (80km/h), maximum speed about 86 mph (139 km/h).  And what is really impressive about this bike is how fuel efficient it is.  It managed about 60mpg during this little adventure. 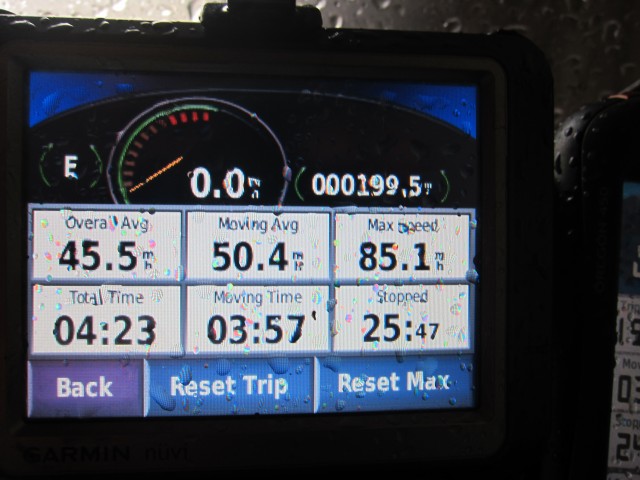 The equipment kept me dry.  The Sidi Canyons, lined with Gore-tex kept my feet dry.

So did the Rev-It jacket and pants.

That was it for now.  Soccer and motorcycle riding, a perfect Sunday. 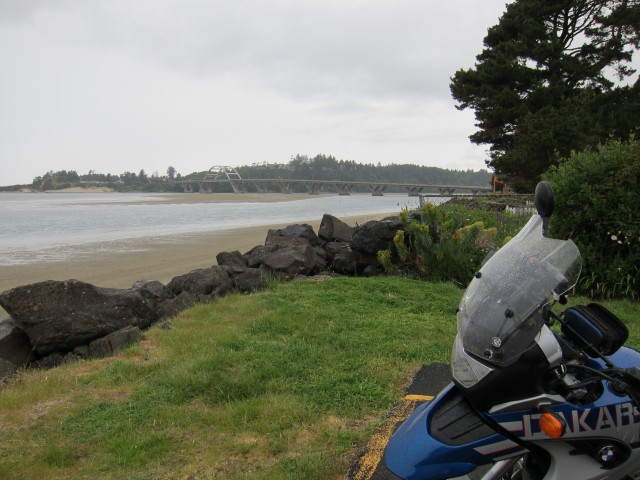 This entry was posted in Riding the BMW Dakar. Bookmark the permalink.