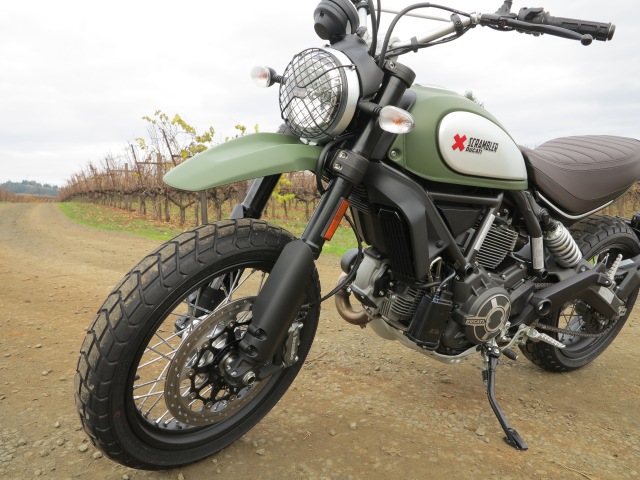 This bike is special.  It was not the first retro Scrambler of modern times, as this has been a job taken by Triumph with its Boneville-based Scrambler series and Moto Guzzi with its accessorized V7.  The Ducati is special because it was designed and built to be a Scrambler from scratch. The result is a well put together modern version of a Scrambler. 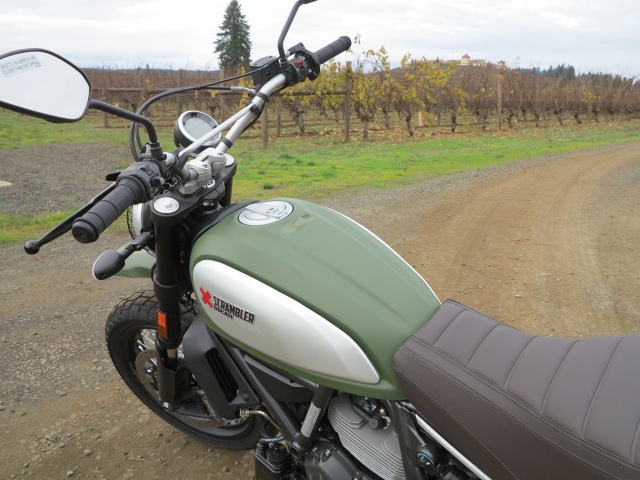 The Urban Enduro looks great in its environment

The bike is great looking on its four versions, and the Urban Enduro looks better in its element than on the show room floor, in my opinion. 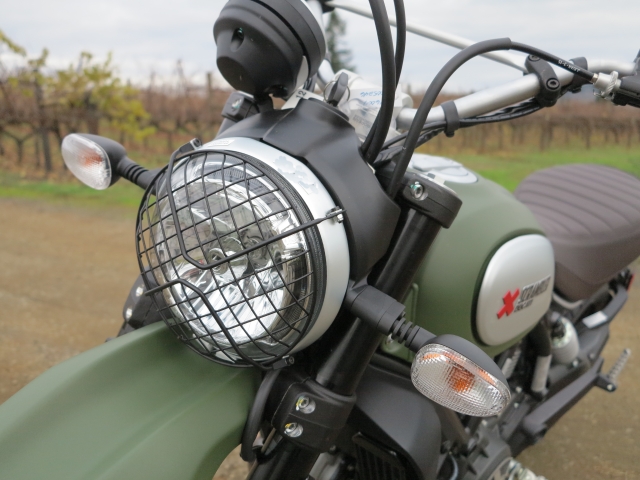 Besides looking cool, this bike’s marketing campaign by Ducati practically re-created the idea of a Scrambler motorcycle for today’s young consumer: a somewhat dirt-ready motorcycle that is cool and exciting for all riders, young and all, and which will mostly be used as a fun commuter bike or a bike for weekend rides of all kinds. 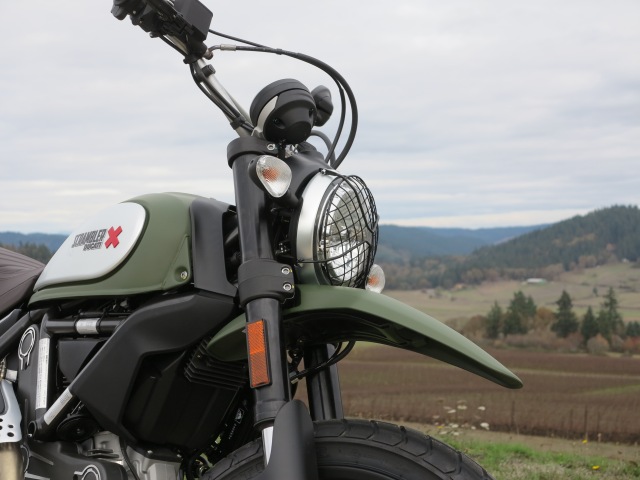 What makes it a Scrambler is its simplicity in the approach of delivering multi-use performance. You get some suspension travel, you get lightness, a compact size, you get a small dashboard with minimal information. 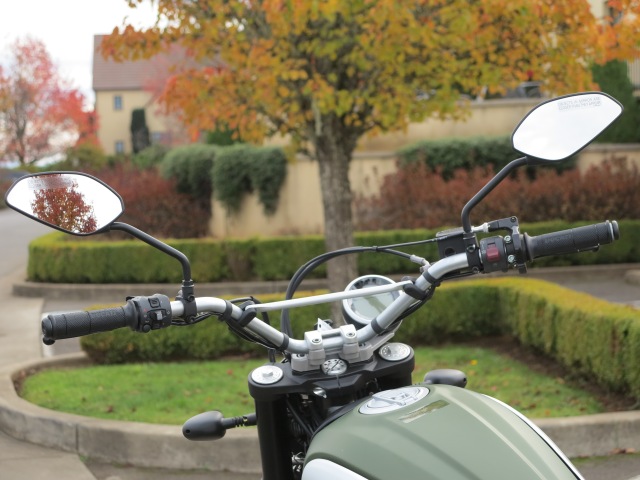 Small round dash at the handlebars

On the dash you will get speed, RPM, and clock.  There is a toggle switch for ambient temperature, trip meter 1, trip meter 2 or odometer.  You will only see one at a time. 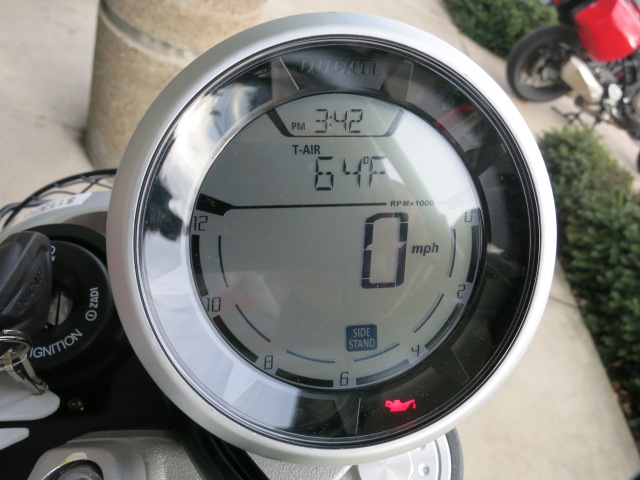 Simple but nicely styled dashboard. Besides speed, RPM and time, you will get one of either ambient temperature, trip 1, trip 2 or odometer.

You get tall handlebars and you get plenty of access to the ground:  at my 30 inch inseam I could flat foot both feet. 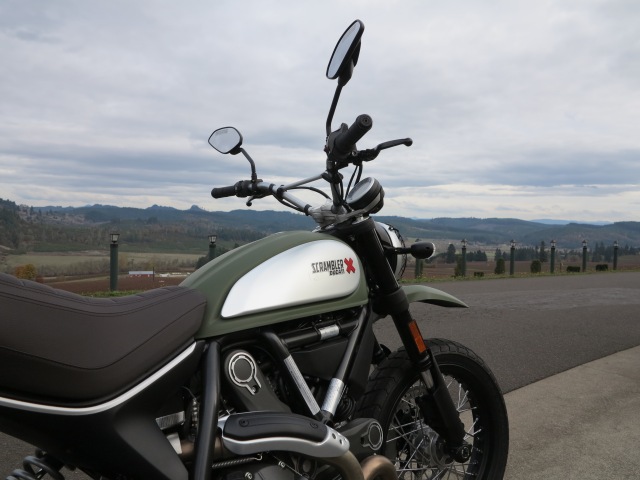 It is a simple bike that does it all and the compromises that come from the simplicity will probably make it a true adventure ride each time you ride it.  There is the wind, there is some vibration, and there is a real motorcycle below the very stylized design. It’s cartoonish on its shape and texture, but it’s a real motorcycle at its core, and a Ducati at that. 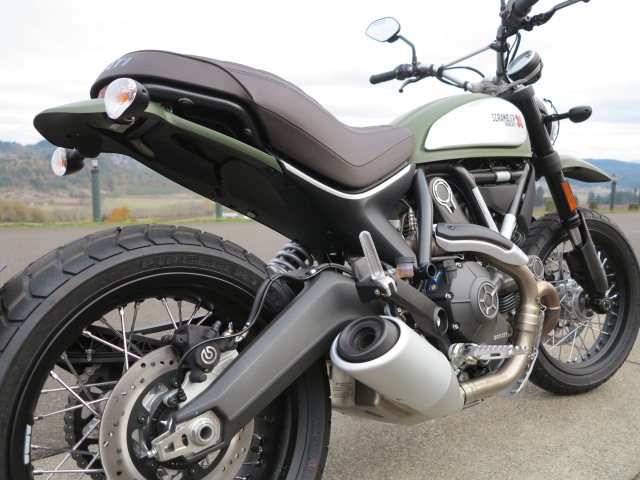 It sounds like a proper motorcycle and it delivers power compatible to an 803 cc air cooled Ducati L-twin (it delivers a claimed 75 horsepower at 8250 rpm and 50.2 pound-feet of torque at a low 5750 rpm).  It has torque down low but it prefers to be ridden closer to its maximum torque, starting above 4k RPM or so.  Which is very much fine with me. 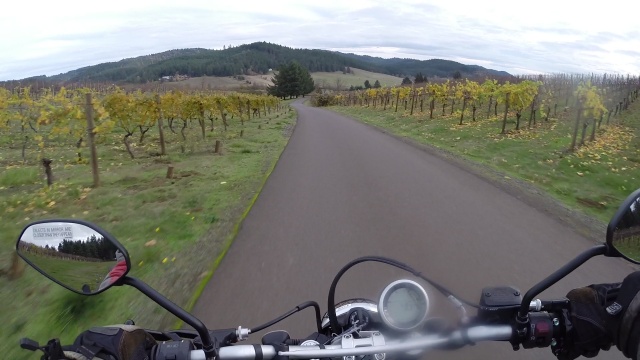 Some journalists have ridden this bike with abandon on all types of road.  Yes, it can deliver at speed and on dirt roads, depending on the rider’s ability.  But the good thing about this motorcycle is that you can ride it slowly, I mean at a regular pace, and you will still have plenty of fun with it. 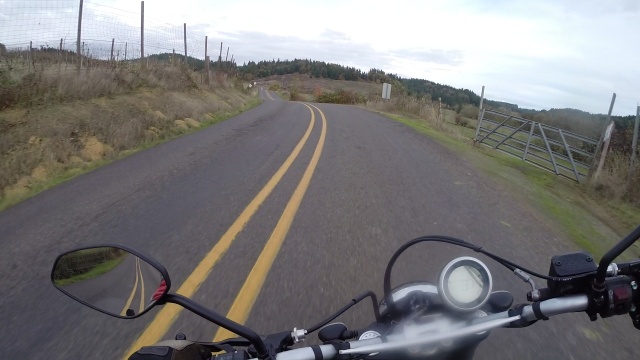 No need to rush!

As a matter of fact, what makes this bike fun is that you can ride it at regular speeds and still have a full motorcycle riding experience.  If you want to go fast, it will do it.  For long trips at speed you will probably need at least some level of wind protection.  At any speeds above 70mph the wind will be pushing hard on the wall that your upright body represents at those speeds.  But for most of the Scrambler owners, I bet the real fun is going to be about riding back roads close to town. Besides riding in town, of course, where it feels right at home! 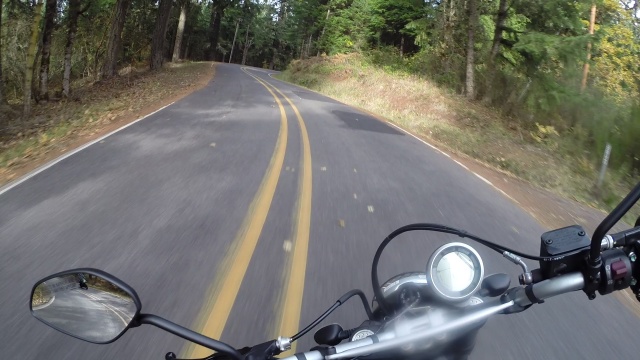 Want to go radical?  Ted Simon went around the world, a 78 thousand mile journey, on a Triumph T100, with a 500cc motor. 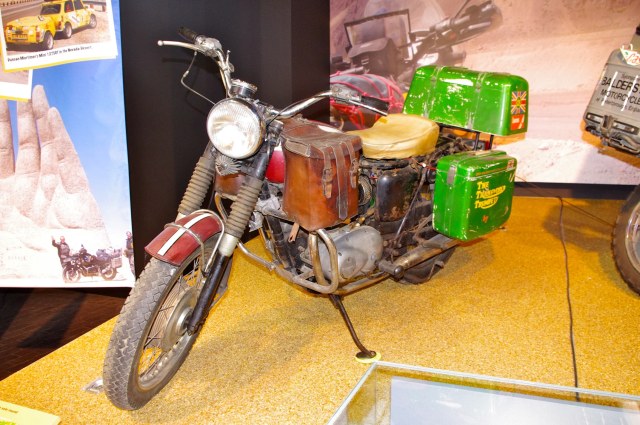 The Ducati Scrambler can do that job as well, I would venture saying.  For it being light, you will probably go places the large adventure bikes won’t. All you need are the bags.  Yes, I know, let’s not go too far on this story and on this bike. 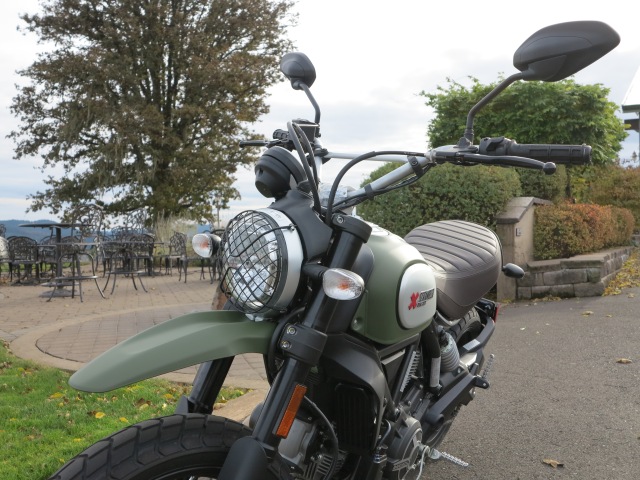 Perfect bike for a short trip to the winery

Would I buy this motorcycle?  If I did buy one, it would mostly be for running errands in town. Easy to get on and get going, light for parking, and with its straight up riding position it gives you the visibility to navigate city traffic.  And on stop and go traffic, you can flat foot and relax while you wait for the light to turn green or the traffic to start moving again.

And which of the four versions would I get (I assume you all know it comes in four versions, five colors)? Mine would be a Full Throttle with the headlight protection of the Urban Enduro and the seat and tank cover of the Classic.  This combination (photo below) was done by somebody else, I just find it the ideal look for this bike for me as well. 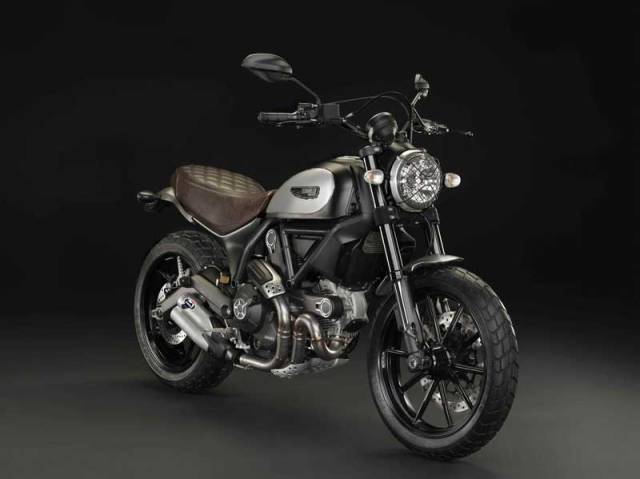 One of the coolest things that happened on this ride took place when I stopped to fill the tank. I noticed the gas attendant staring at the bike. I motioned him closer buy saying: this is something different, uh? 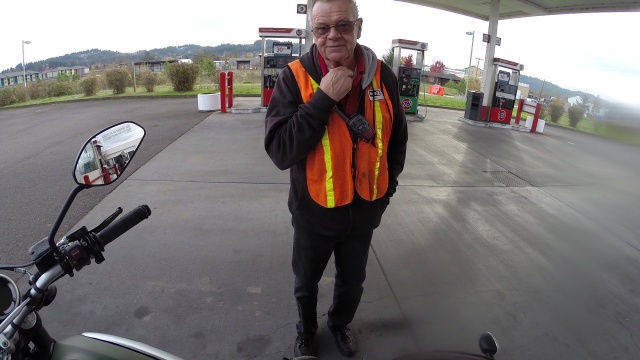 Once owner of a 1865 Honda 305 Scrambler:  Thank for telling your motorcycle story!

He indicated yes and pointing at the tank he told me the last time he had seen a “Scrambler” name plate on a motorcycle was on his 1965 305 Honda Scrambler.  How cool is that? I really appreciated the connection.  I mentioned to him the original Ducati Scrambler was born in 1962, and pointed to the tank cap where it states: “born free 1962”. 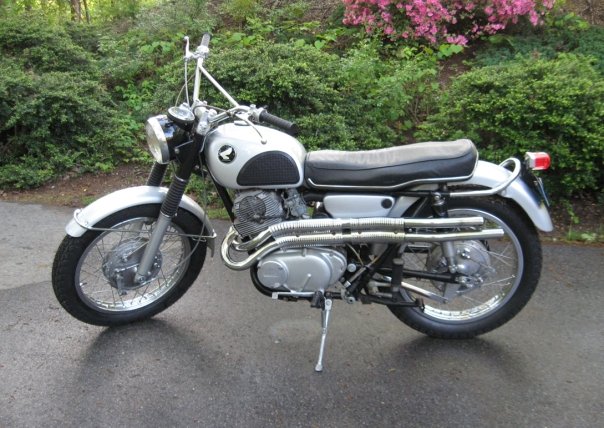 Anyway, it was a fun ride on a fun motorcycle. 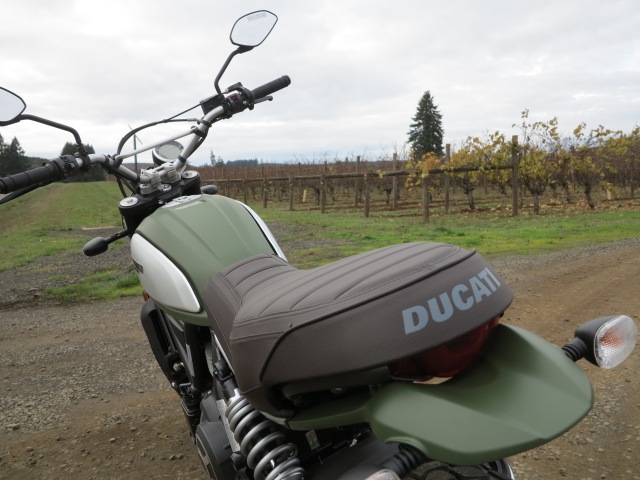 Meanwhile, from the time of its launch to today, the Scrambler idea has expanded to several other brands.  BMW will have its R nineT Scrambler soon.   Triumph has turned their Boneville bikes into water-cooled 1200cc machines, and I believe they still have a Scrambler version. Yamaha has taken their FZ-07 (MT-07) platform and created their version of Scrambler, the XSR700, with its nice parallel twin. Husqvarna is playing with the idea of their own as well. 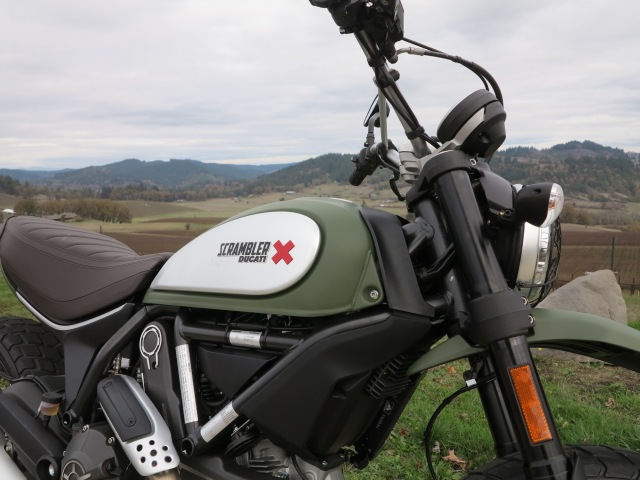 Will they be light and as much fun as the Ducati is? I don’t know. Stop by your local Ducati shop and take a look if you haven’t yet (I doubt you’ve never seen one since this bike has been out for quite some time, but one never knows). Anyway, here in my neck of the woods, the European Motorcycles of Western Oregon has two Urban Enduros and one Classic on the floor.  Maybe one of them will end up under your Christmas Tree?

3 Responses to Riding the 2016 Scrambler Ducati