The weekend before last I ran into my friend Ricardo and his wife at a local grocery store. I had not seen him for a while, as we usually see each other on the soccer pitch and both of us are out on injuries for quite a while. Getting old sucks. Anyway, I got an invitation for dinner from them, and then Ricardo and I talked about riding.  And we made it happen. Yesterday Doug and Ricardo showed up at my house and we went for a ride.

Setting up for a ride. Saturday, March 15th

We stopped at the gas station with the non-ethanol pump on 99 and Irving and there was a long line for that good pump. It was the beginning of a nice weekend and people were getting the good gasoline for their toys or for the small motors of machines involved in yard work. Soon it will be warm enough that boaters will be lining up for the good gas as well.

We took 36 to Territorial, to Monroe, and from Monroe we took Alpine road all the way to Alsea.  At some point on Alpine road Ricardo thought his front tire needed air, so we stopped at the gas station in Alsea.

Checking air pressure on front tire of the Super Duke.

Tire air pressure was okay. We think it probably was the Alpine road pulling its tricks. Despite the appearance of being clean, it is a seldom used road, I would say it is not the best surface for traction may give that wondering feel upfront. All was good, we carried on to the coast via 36. 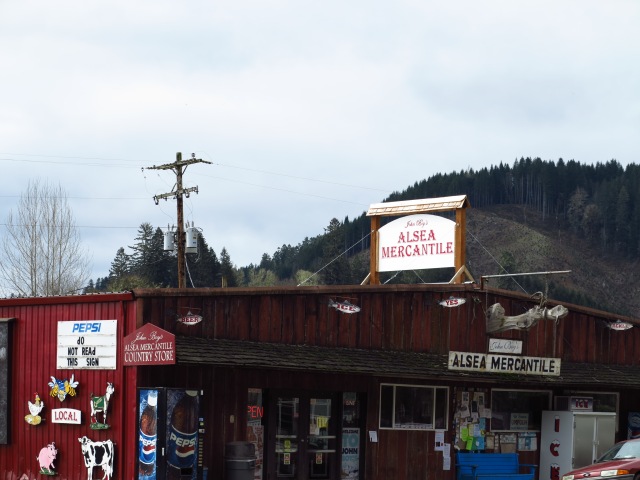 Alsea Mercantile, in Alsea, of course.

We hit the coast and made a left on 101 and went straight to Yachats. This time I suggested we went elsewhere other than Ona for lunch.  But Doug and Ricardo were set on Ona.  Fine with me. 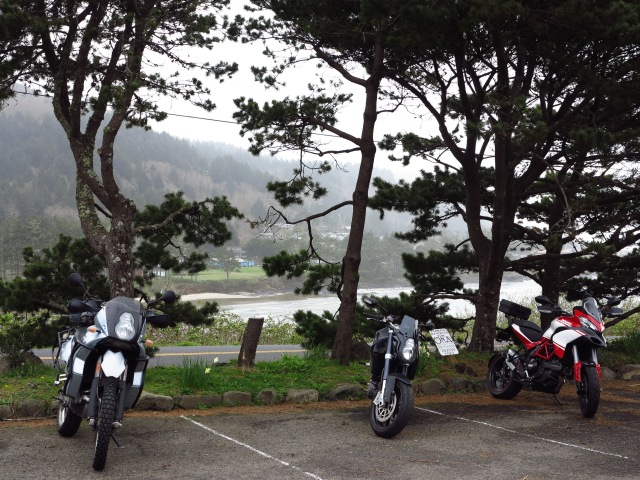 Doug ordered the two-eggs with bacon and the server told Ricardo and I, both of us ordered the Manila Clam chowder, that we would be envious of Doug’s order.  And she was right, it was quite a plate, the bacon looked really fresh.  It looked really good even when the Manila Clam chowder with a couple of slices of freshly baked bread is a great choice.

During one of my loops I went next door to Ona, to this joint (photo below) for a greasy burger. Perfect for a cold day and it matches better a biker atmosphere. But they took a long time to serve and the food at Ona is far better.

The “joint” next door

This time there was no rain at this part of the loop, just a heavy ocean mist, enough to require wiping the visor regularly.  We stopped for one quick photo shoot of the ocean.

Just a minute and we got back on our bikes and got on our way to Florence. 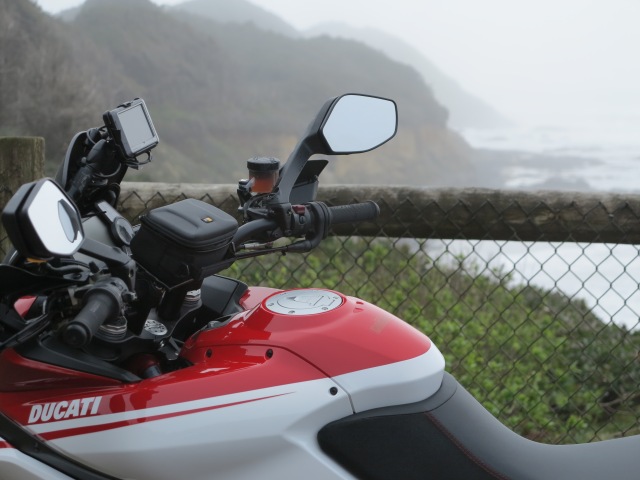 Nicest bike I’ve ever had…

From Florence we took 126 to Mapleton for a shot of non-ethanol gas. Well, they needed it, not my Ducati.  They did not look too happy when I bragged about my bike’s computer indicating I had another 100 miles to go before the bike would need a fill up. I’ll be more subtle next time. Maybe not. 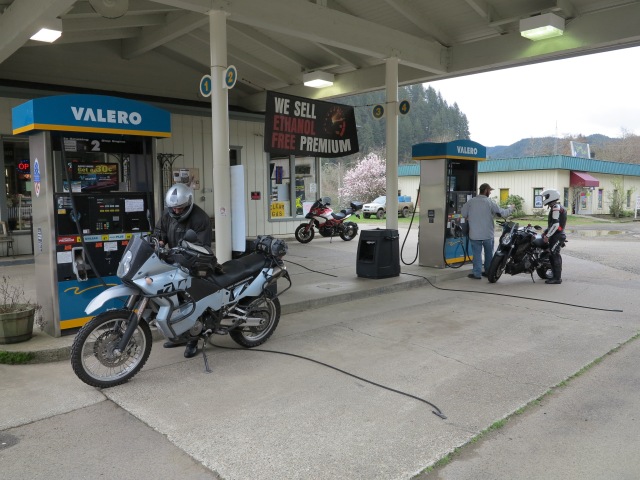 The KTMs need a refill. The Ducati looks from the distance.

We said our goodbyes here. Twenty or so miles down the road the two of them would take the cut-off from 36 to Noti and cross 126 towards Territorial and get to the south Eugene area where they both live.  I would stay on 36 and beyond to Prairie Rd, it is almost a straight shot all the way to my house, on the wrong side of the tracks.  But we rode together all the way to their turn off point and it was quite fun following them. I was really glad I was riding the Ducati, each time I get more comfortable on this bike, trust it more, use it better.  I just don’t like the switchbacks and very tight corners with it. But 2nd or 3rd gear, low-to-mid speed corners it shines. I’m not even mentioning the long and sweeping corners on 4th gear at 5,5K rpm as you open it up at the apex in that sweet spot of the motor. No words to describe the feel, the sound, the experience the machine generates.

I stopped at the Chevron on 99 and Irving and filled it up, it took 4 gallons to fill the tank.  That means the bike made almost 50 mpg. The bike practically had 1 gallon left in the tank, which would be good for another 50 miles or so.  250 miles between fill-ups is not out of question for this bike.  More distance is certainly possible from a full tank if taking it easy.

Back were I started: 4 gallons for the loop

A few more miles and I was back home, it was another great day for a ride. About 200 miles completed (the GPS showed 191 miles as it was turned off for a few miles when one of the connectors came lose).

About 200 miles for the day

I did this entire loop on Urban mode, with 150 High.  I usually do it on Touring or Sport mode, both on 150 high, but with a bit harder suspension setting, especially on Sport mode. I had not slept very well the night before, so I was looking for comfort and not performance. I don’t know what else to say, except that this is an amazing motorcycle. I’m already looking forward to the next time I will take it out for a ride.

This entry was posted in Riding the Ducati. Bookmark the permalink.