Canon G1 X and a trip to Lincoln City

I’ve been looking for an upgrade to the Canon S-95. My ideal camera has the S-95 size, an about 5x zoom lens, and an APS-C sensor, such as what we see on DSLRs. But I know that is virtually impossible without some compromise in size. That’s why the S 95 was my camera of choice at the time I bought it – smaller than the Canon G-series cameras but with their same sensor (1/1.7″) size.  The 1/1.7″ sensor is far smaller than a DSLR sensor, but larger than the regular point and shoot cameras, allowing for some quality on low light shooting on a very compact package.

But now I was searching for better quality and I’m willing to compromise some on size. Canon has the EOS M (or it will soon be available) with a sensor that is of APS-C size (Canon DSLR size).  But what people see as an advantage (having interchangeable lenses), to me it defeats the purpose of portability. The EOS M camera and lens size is fine when with the 22 mm lens (pancake style), it may even fit in a large jacket pocket. It makes it smaller than the most common Micro Four-Third interchangeable lens cameras. But when you want the versatility of a zoom lens,  and attach the available zoom lens to it (what is available now is a 18mm to 55mm equivalent I believe), the camera and lens becomes the size of those four-third cameras, almost at the size of entry level DSLRs from Canon and Nikon.

Then I heard of the G1 X and read some more about it. The sensor is about 90% of a DSLR sensor (see comparison chart above). Larger than the sensor on the Four Third Cameras, larger than the sensor on Nikon’s 1-series cameras.  And it comes with a zoom lens, fixed, but with enough flexibility. On the other hand, the lens is bit on the slow size, does not offer a decent macro capability and focus can be an issue. 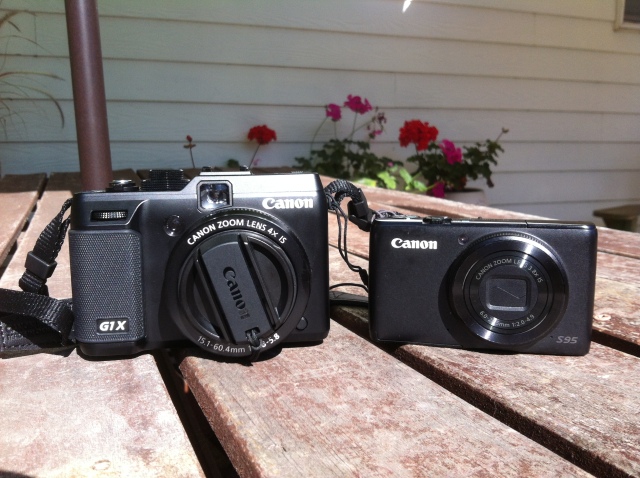 There is a compromise on size as well. Although on the picture above it seems relatively small, it is not. Overall it is a tad smaller than the Four Third cameras, perhaps the same size as Nikon 1-series.  It won’t fit in my pocket. That has been my main issue when purchasing a camera: it has to fit in my pocket! So the G1 X did not make the S95 obsolete on general use. I still use it and will continue to use it until something else comes in the market, and I’m sure something eventually will happen.  But for motorcycle riding the G1 X works without the need of resorting to tank bags, which is something I want to stay away from acquiring.  But it didn’t fit the Otter box I had in the Triumph Tiger where I could fit the camera, the telephone and my wallet. So I went back to the non-water proof el-cheapo bag I originally had fitted on this bike’s handlebars. It works perfectly until I find an appropriate Pelican or Otter water proof box for the handlebars.

Canon G1 X barely fits in the old camera bag on the handlebar.

In the end, will it produce better results? I will let you be the judge. Of course, you will have to be able to filter out of this equation my inabilities in taking photos. And on top of that, I’m still learning about this camera. But I see a large gain in photo quality with the G1 X. And to test it properly, it goes on its maiden motorcycle voyage. We had rented a house at the beach and I would travel by motorcycle, of course, enjoying what could be the last of dry weekends for this year (this trip took place October 6th, 2012), and connect with the rest of the gang at the beach.

Getting ready for another trip to the coast. October 6th, 2012

First stop was to check the grapes in Benton County. Harvested! I was disappointed to have missed the action. Perhaps next year I could join the grape pickers and be a small part of the wine making process.

While passing through Monroe I saw some kids selling freshly picked apples. Whenever I see kids putting an effort on something like this I feel like I should contribute. I bought half a dozen apples, 5 cents each. Would have bought more if I had the space. And these apples were good.

I stopped by the Philomath non-ethanol gas station and continued on 34 towards Waldport. Why use the most direct route if I could take the longer and most fun route, right? I made a quick stop at Seal Rock.

I still need to figure out depth of field and manual focus. And I’m not sure you can see the quality difference when basing this on the manipulation made by the WordPress (this blog’s host site) photo compression process.  I can definitely see it on my moderate definition Samsung monitor. 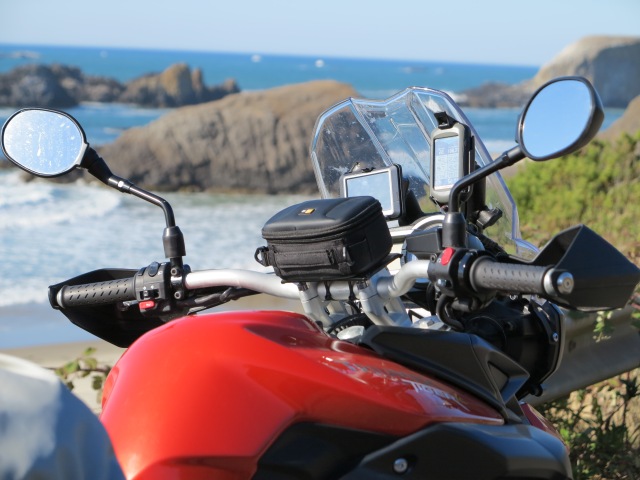 The Triumph Tiger at the Seal Rock, Oregon. October 6th, 2012

I made it to the house, this is the second time we rented this same house this year. As the sunset approached I left the comfort of the porch, the great conversation, snacks and cold beer and walked to the beach with the G1 X. 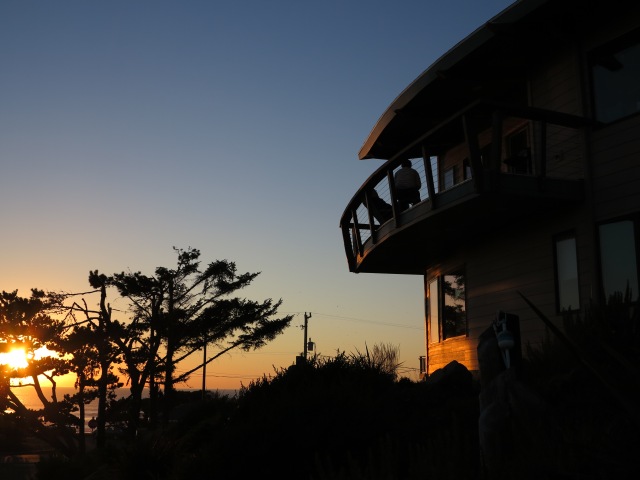 The porch at the house in Lincoln City at sunset. October 6th, 2012

And here is where I started to notice the best results from the G1 X camera, and realized how much an upgrade it is from the S95.  The low light results are a major step up. Same with the details on landscape photos. 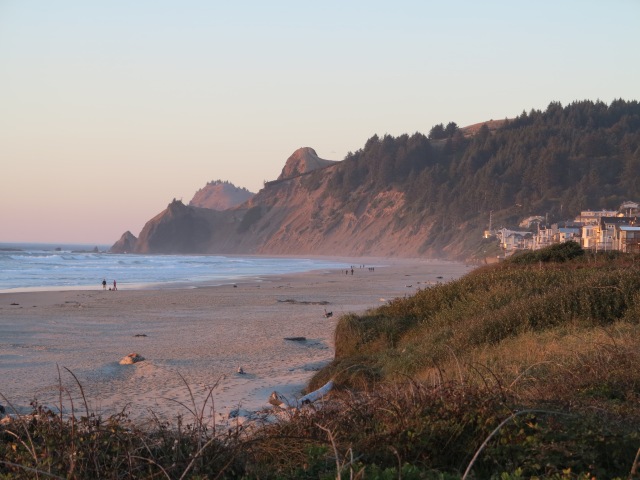 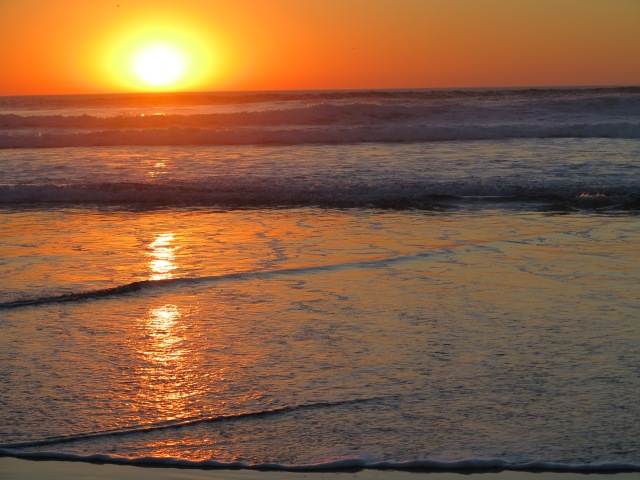 I took several other shots, all of them, when looking at the photos on the computer screen, show a substantial improvement on quality from what the S95 delivers.  Both the S95 and the G1 X cameras have the ability to shoot in RAW format. I have not explored what I can get from the RAW on either camera.

The next day, on the way back to Eugene I made a quick stop in Depoe Bay.

Further south, documenting the ocean’s advances on the Oregon coast. 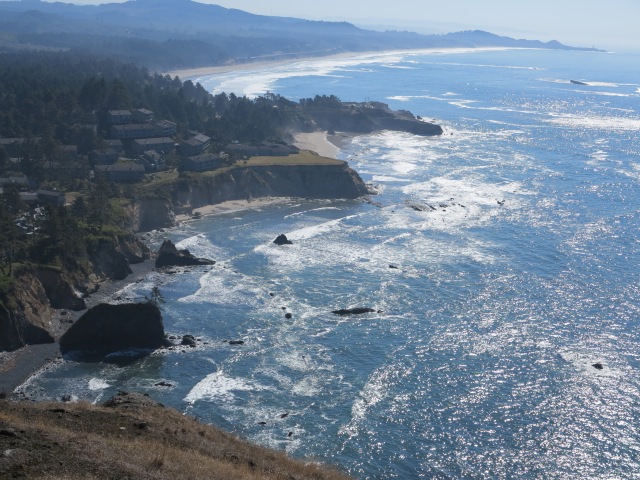 Fisherman busy at the Alsea Bay in Waldport.

The clouds and fog approaching the coast in the mid afternoon.

View of the approaching clouds and fog from Heceta Lighthouse lookout. October 7th, 2012

Checking the Heceta Lighthouse renovation. They must be close to completing the job.

The Heceta Lighthouse and the forming low clouds. October 7th, 2012

I had filled the motorcycle tank in Philomath, with non-ethanol gasoline. And I’ve made a habit of filling again with non-ethanol fuel on my way home.  My motorcycles have practically no ethanol on their tanks. Does it really matter? I never had a problem with ethanol in the gasoline, even before I found the non-ethanol gas stations. But we hear lots of complaints about ethanol complicating fuel injection systems, specially with stored bikes in the winter, and also for being responsible for fuel tank expansions in the Ducatis. So I always look for the non-ethanol variety. But this time I almost payed dearly for it. The “miles to empty” had gone down to single digit and soon after it indicated I had 3 miles to go it went blank, showing three dashes. But I was just arriving at the gas station at that time. No more gasoline left?  The gas gauge had one bar left. 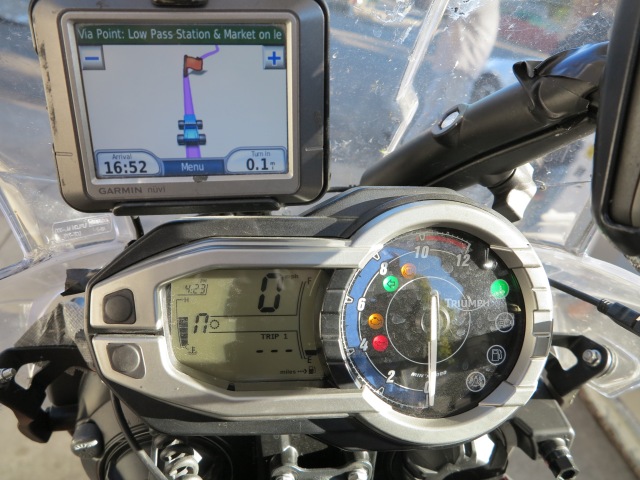 Although I made it to the Low Pass gas station I knew I could not go too far from that. I had never stopped by here past 4pm, and although the sign said “open” no one came out to greet me and operate the pump. 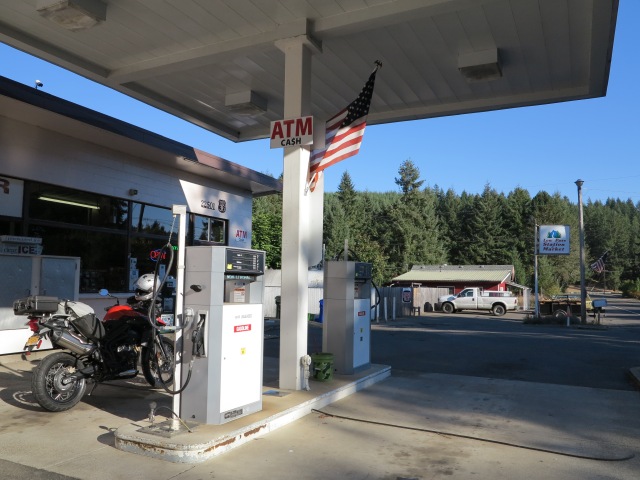 I walked towards the other building, looking for someone that could help me. I came across someone who told me that he had just been there and the person who operates the pump was inside.  I had not tried the door, it all looked dark inside the gas station. So I went back there, the door was open and I found her, she had been on the back and was just coming back to the cashier. Great! I told her of my predicament, and that I feared running out of gasoline. She told me not to worry, they are open every Sunday until 7pm, and are committed to it. Great to know this for future trips.  In the end, I could only fill the tank with just under 4.6 gallons. Tank size is supposed to be 5 gallons. But we all know manufacturers’ specs are more of a technical number than an actual figure, so I don’t quite know how much gasoline I still had in the tank. In theory, 0.4 gallons. The bike had run 231 miles and I got 4.55 gallons, 50.8 MPG. The 231 figure must be the actual distance the bike can run on one full tank. It is not a bad number. Now with a fuel tank filled with practically only non-ethanol gasoline, 26 miles later I was home. 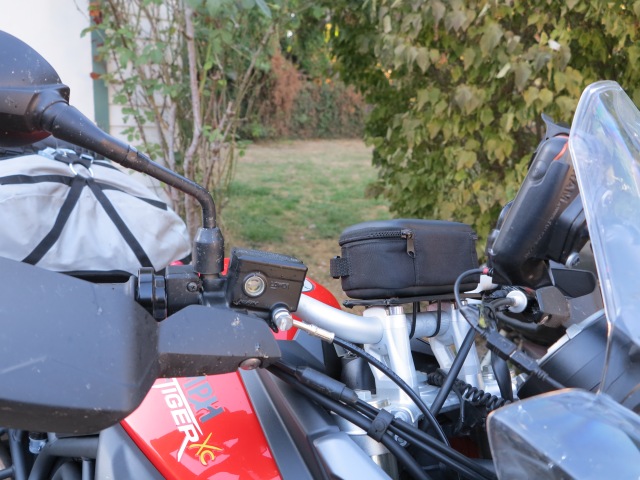 Total miles for this trip was 305 miles (491 km).  Who knows when I will be riding again. That certainty of good weather is no longer going to be here as we get deeper in fall weather. The rains are supposed to start soon (and they have actually started as I write this).

View of the I-5 Bridge from the McMenamins restaurant in Vancouver, Washington

I spent this week in Portland and had a chance to experience the G1 X a little bit more.  No questions about the quality of the camera. I can really see the difference. But I also know that outside of the bike, because it doesn’t fit in my pocket, I have to make a real commitment to have it with me, carrying an extra bag or something. It definitely isn’t a long term solution. I will be looking for something with better portability to carry with me at all times. Meanwhile the S95 has not become a back up camera. It remains my day to day, all occasions camera (I always have a camera with me).

This entry was posted in Product Reviews, Riding the Triumph. Bookmark the permalink.